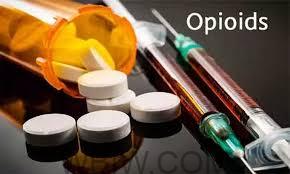 BLOOMINGTON – Indiana University researchers are developing a wearable device to detect and treat an opioid overdose in real-time, thanks to a National Institute on Drug Abuse grant expected to total more than $3.8 million over three years.

The researchers aim to develop a patch that can relay physiological parameters to the wearer’s smartphone, which will then use artificial intelligence to detect changes indicative of an impending overdose. If signs are detected, the patch would administer a life-saving dose of naloxone to the wearer, reversing the overdose.

The project is the brainchild of Feng Guo, a bioengineer and assistant professor of intelligent systems engineering at the Luddy School of Informatics, Computing, and Engineering, and Ken Mackie, the Jack and Linda Gill Chair of the Gill Center for Biomolecular Science and a Distinguished Professor in the Department of Psychological and Brain Sciences in the College of Arts and Sciences at IU Bloomington.

“This device could be useful in preventing overdose deaths, particularly for people taking opioids under a physician’s care,” Mackie said. “These are people who take opioids for medical conditions, but who are at high risk for respiratory depression. For example, someone whose dosage changes from a lower dose to a higher dose or someone who switches from a long-acting to a short-acting opioid. In addition to patients taking opioids under a physician’s care, we hope that this device might be beneficial for individuals with an opioid use disorder who are at risk for respiratory depression following an opioid overdose.”

The project came together while Guo was developing a concept device for automatic drug release. He mentioned it to his colleague Mackie, who saw the potential for a solution to possibly deadly respiratory depression from opioid overdose.

“AI really leverages the power of the sensor and the device to enable a convenient, personalized therapy method,” Guo said.

The grant will be used to acquire the necessary data to train the algorithm to differentiate between conditions and make the device as accurate as possible, Mackie said. Because oxygen levels, pulse rates, and blood pressure can change due to other causes, the team must be certain the naloxone dose is administered only when respiratory depression is imminent. While naloxone is usually not harmful if administered by mistake, an accidental dose could cause unpleasant withdrawal symptoms in some opioid-dependent individuals.

“People die from opioid overdoses every day, and these deaths are often preventable,” Mackie said. “We hope that this patch could help prevent unnecessary deaths.”

Guo and Mackie are working with collaborators Greg Terman and Jake Sunshine, both anesthesiologists and pain physicians from the University of Washington, to collect physiological data from people taking opioids under a physician’s care, as well as those with an opioid use disorder who are being monitored. Larry Cheng, an engineer at Penn State University, is helping fabricate the sensors for monitoring physiological parameters.