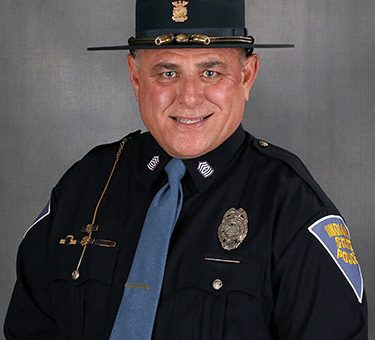 SELLERSBURG – After more than 42 years with the Indiana State Police, today, June 10, 2022, is First Sergeant Sam Sarkisian’s final day with the department.

Appointed as a Trooper on December 14, 1979, Sam Sarkisian worked his first year assigned to the Jasper Post before transferring to Sellersburg. Sam spent his first eight years as a road Trooper but soon found his calling in criminal investigations. He served as a district detective for ten years and was then promoted to sergeant to serve as a crime scene investigator for three more years. In 2000, Sam Sarkisian was promoted to First Sergeant and served as the Sellersburg Post Detective in Charge (DIC). In 2015, he was assigned as the Area IV Supervisor for all Area IV Crime Scene Investigators and served in that capacity until retiring.

In addition to his regular duties, Sarkisian also served as the team leader for the South Zone Hostage Rescue Team for 19 years. Sarkisian is especially proud of his time spent on the team, stating he loved being able to assist both his fellow Troopers and those in need in this capacity.

Although retiring from the Indiana State Police, Sam Sarkisian will continue his career in law enforcement and has accepted a position with the Clark County Sheriff’s Department. Sarkisian resides in Floyds Knobs in Floyd County along with Kathy, his wife of 35 years.