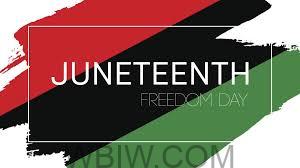 BLOOMINGTON – The City of Bloomington and Indiana University Neal-Marshall Black Culture Center will host a Juneteenth celebration on Saturday, June 18, from 2 p.m. until 7 p.m. at Switchyard Park (1601 South Rogers Street).

Juneteenth is the annual national commemoration of the ending of slavery, which Black Americans have celebrated since the late 19th century.

The community-wide, family-friendly gathering will feature free food from Carson’s BBQ, games, and music, with Black-owned businesses on-site offering additional products for sale. Activities will take place at the shelter, the great lawn, and the Community Foundation Switchyard Plaza Spray Pad. Those attending may bring their own food and non-alcoholic beverages, chairs, and picnic blankets; there is limited available seating in the park.

Also known as Freedom Day, Jubilee Day, Liberation Day, and Emancipation Day, Juneteenth celebrates the emancipation of those who had been enslaved in the United States. Originating in Galveston, Texas, about two months after Confederate general Robert E. Lee surrendered to Union General Ulysses S. Grant at Appomattox, Virginia, Juneteenth commemorates Union General Gordon Granger arriving in Galveston, Texas on June 19, to announce the freedom of enslaved Black Americans and the end of the Civil War. Granger’s announcement put into effect the Emancipation Proclamation, which Lincoln had issued two and a half years earlier in January of 1863.

On June 17, 2021, President Biden signed into law a bill that had passed both the House and the Senate, making Juneteenth the 11th holiday recognized by the federal government.

“Bloomington is elated to follow the national example and celebrate Juneteenth as a City holiday,” said Mayor Hamilton. “As Barack Obama pointed out, Juneteenth does not celebrate victory, but progress, the progress we have made and that which we need to keep working toward.”