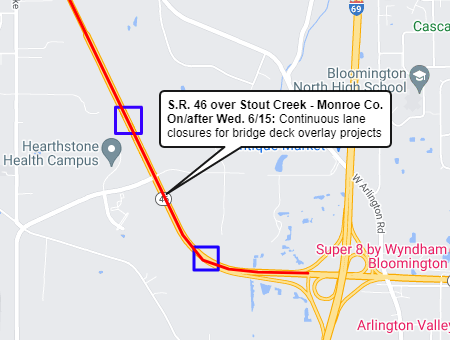 OWEN/MONROE CO. — Indiana Department of Transportation contractor RAM Construction Services plans to begin work on or after Wednesday, June 15, to complete a bridge deck overlay project on S.R. 46 at Meadowbrook Creek in Owen County. Work will take place roughly half a mile west of U.S. 231 between Owen Valley High School and Texas Pike near Spencer. Drivers can expect lane closures and width restrictions while work is in progress.

Four additional deck overlay projects will also begin as early as Wednesday, June 15, on both eastbound and westbound S.R. 46 bridges over West Fork Stout Creek and Center Fork Stout Creek in Monroe County. The bridges are located between Arlington Road and I-69 just west of Bloomington. Drivers can expect continuous lane closures between both locations on S.R. 46. Access to and from Curry Pike will remain open during construction.

The $297,000 contract was awarded to RAM in September 2021 and is expected to be complete by the end of July. INDOT reminds drivers to slow down, avoid distractions, and consider worker safety when traveling through active construction zones.

Stay Informed
Motorists in Southeast Indiana can monitor road closures, road conditions, and traffic alerts at any time via: