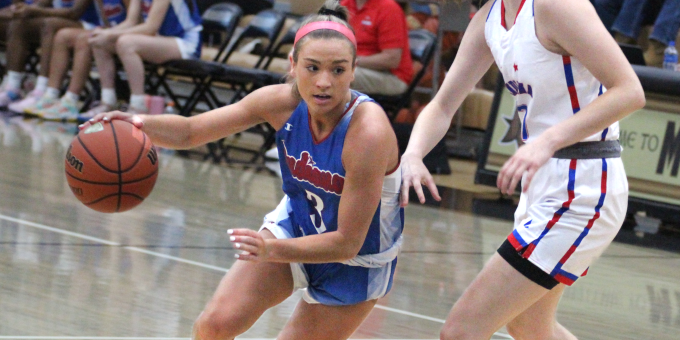 FORTVILLE – Competitive juices flow through the veins of the elite. Winning is serious business, even in the summer All-Star scrimmages that are showcase events. Doesn’t mean anything? Tell that to the Junior All-Stars, who pushed their Indiana elders to the limit during the workout that’s a precursor to the home-and-home series with Kentucky.

Spurred by pride, or perhaps the fear of humiliation, the Seniors battled back from a double-digit deficit in the first half, then scored the final five points during the last two minutes to finally vanquish the Juniors 89-86 in the Wednesday night tuneup at Mt. Vernon.

Alyssa Crockett scored the late go-ahead points and paced the Seniors with 14 points. Bedford North Lawrence’s Karsyn Norman, one of the core six who played in both Junior games this week, scored 11 points with four steals and two assists just hours after announcing her commitment to Butler University, but that sparkling individual effort was dulled by the loss. If you play, she does it to win.

“Coming in, everyone thought we had a good shot,” Norman said. “And I think we proved that. We just let it slip away, I guess. But it was a lot of fun. It was a good group of girls on both teams.

“We took it very seriously, but I kind of figured they weren’t going to let us win – know what I mean? I was a little heated. It’s obviously really competitive.”

Norman’s final points, a steal and layup off an Ashlynn Shade give-back pass, powered the Juniors in front 84-81 with 2:33 left. Shade’s steal and bucket created the last Junior lead at 86-84. But Crockett, destined for Michigan, scored off an inbound lob, then cashed in two free throws with 37.4 seconds left. After a shade miss, Tanyuel Welch converted a free throw. Riley Makalusky’s hurried bomb at the buzzer to force overtime rimmed out.

The Juniors, who haven’t beaten the Seniors since 2014, dominated the first half. Norman scored seven quick points – converting a steal into a breakaway, swishing a wing trey and popping a 15-footer – for a fast 12-2 lead. Makalusky, a future Norman teammate at Butler, got hot from deep as the Juniors roared to a 31-21 lead after the first quarter, and another Norman bucket from the lane kept the Juniors in front by 11. The lead was 50-44 at the break.

“I didn’t expect that,” Norman said. “I knew we would give them a good game, but we got off to a really good start and I wish we could have kept it up.”

The Juniors, who went with five-player rotations every five minutes during the 10-minute quarters, juggled the lineups in the second half, which might have disrupted any rhythm. But the main reason for the Senior rally was dialing up the intensity and cutting off the Juniors’ second-chance points. The Juniors had 16 points in that category in the first half, only one in the second.

“What you saw more than anything was the Seniors started to care,” Junior coach Bob Lapadot said. “This is important, this is everything to so many people. We pushed them and they needed to be pushed.

The Seniors had balance. In addition to Crockett, Mila Reynolds (13), Jessica Carrothers (13) and Welch (11) all reached double figures.

“The Junior team played exceptionally well, especially in the first half,” Senior coach Rod Parker said. “They moved it well, really came out and gave us a challenge. We were a little sluggish. We got our legs, came out with more intensity.”

The Seniors performed without Miss Basketball Ayanna Patterson, the Homestead star on her way to Connecticut. She will be back as Indiana faces Kentucky on Friday (in Owensboro) and Saturday (at Southport in Indianapolis).

“She’s a special talent who will get us some easy baskets,” said Parker, who coached Patterson at Homestead. “When she’s playing, we can utilize her talents because they have to pay so much attention to her.”

Norman, who also scored 12 points in the Junior win over Kentucky on Sunday at BNL Fieldhouse, was also paying attention. She now has her sights set on earning a spot on the All-Stars next year.

“This whole experience, I’m really looking forward to it,” she said. “I want to be one of those girls next year.”

In the boys game, the Seniors stopped the Juniors 90-75. Javan Buchanan had 15 points and Ryan Connell added 14 for the Seniors, who played without Mr. Basketball and Purdue recruit Braden Smith, plus Indiana recruit C.J. Gunn.

Myles Colvin had 15 points and Zane Doughty totaled 14 for the Juniors.