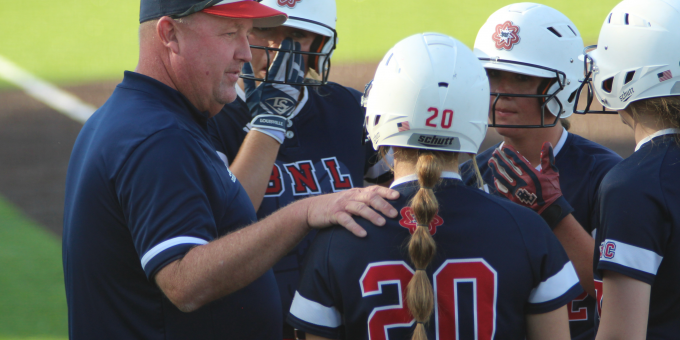 BEDFORD – “Baseball is only a game, a game of inches and a lot of luck.” That quote is attributed to pitching legend Bob Feller, and the same can be said of softball, its sister sport. Bedford North Lawrence can testify to the slim margin separating supreme exhilaration and utter heartbreak, the difference between victory and final defeat.

Annie Waggoner’s blast to deep left field in the top of the seventh inning in the semistate clash with Shelbyville crashes off the top of the fence, just a few inches from a go-ahead home run. Shelbyville’s Karissa Hamilton hammers a bomb that just clears the fence – in almost the exact same spot as Waggoner’s drive – for a walk-off winner in the eighth. That’s how close the Stars were to the Final Four.

Instead, and that unwinnable ‘what if’ game could be contested on several plays during that battle, BNL’s remarkable 2022 season was closed, the dream of going deeper into the postseason than any team in program history shattered by the rudest of wake-up calls.

What a glorious run. The Stars finished 28-3, matching the school record for wins set the previous season, and the three setbacks (all on late scores) were by a total of four runs. That close to perfection. Inches away.

“That’s pretty special,” BNL coach Brad Gilbert said. “It just took a swing here to there, and who knows what could have happened? It was awesome that the kids played so well. It has us amped up and ready to just get after it. We’re already talking about what we need to do to get a little bit quicker, we’re already looking ahead. Hopefully the kids got a taste of it and now it’s time to win a semistate.”

BNL started the campaign with questions and emphatically answered all of them. Could the Stars duplicate the regional championship of 2021? Check. Could they find an offensive replacement for departed star Sarah Stone? Check. Would they have enough pitching power? Double check.

With a fantastic freshman filling the void, with a dedicated senior class filling half the starting lineup, with two All-State standouts and three All-Hoosier Hills Conference studs doing a lot of damage, BNL was a feared force as it won the outright league title, plus sectional and regional crowns.

“There were questions from last year’s season,” Gilbert said. “But I knew pretty quick that we had the mentality, that our seniors were working hard, putting themselves in position to help the team win, even though we had some kids that had not played a lot of varsity. We really played well.

“It was just replacing some pieces, just take off and go. It was great to see them have the success. When you go down the list, our stats were really good.”

The numbers were incredible. Freshman catcher Ava Ratliff burst into the scene, setting three school records. She slugged a state-best 21 home runs (leading the nation among freshmen) among her 50 total hits, and she drove in 53 runs. She was so feared that opposing coaches intentionally walked her six times in the final two games.

Waggoner, an Indiana State recruit, was brilliant in the circle, matching her school record with 20 wins while totaling 198 strikeouts. She also hit .418 with 4 homers and 27 RBIs. Purdue recruit Braxton McCauley hit .429 with 7 homers and 31 RBIs while patrolling center field with amazing grace, and right fielder Aliza Jewell batted .372 with 8 bombs and 27 RBIs. BNL set a team record with 55 home runs. Add second baseman Lauryn Anderson (.305 with 27 runs scored) into the equation, and that’s quite the returning nucleus for 2023.

BNL’s concern will be plugging holes left by shortstop Carlee Kern, left fielder McKaylin Turner, first baseman Maddy Bennett, designated hitter Carsyn Alvey and injured reserve Emma Foreman. They were key contributors to the back-to-back regional titles. The Stars will be senior heavy next season, but the newcomers will be young with limited varsity experience.

Gilbert is expecting battles for the open positions, looking at incoming juniors Haleigh Canada, Britta Warren and Anna Williams, sophomores Tori Nikirk and Kendall Graves (a regular at third base in 16 games) and senior Hayley Davis. All are versatile, all could land in the infield or outfield. The key will be who’s ready to hit varsity pitching, who’s prepared to step up from a pinch-running role to the hot spotlight.

“We start right away,” Gilbert said. “I’ve already challenged the kids, what will they do to make sure they are ready? We have some young kids coming back that are really close, some that need to improve just a little bit. They’ve been around for a year or two, they’ve seen the success we’ve had and been a part of it, too.

“We just need to improve on some little things. We’ll challenge our pitchers (including Jewell and Davis) to keep getting better. Our hitters need to get better at putting the ball in play. We have to do a better job of making contact when runners are in place. It’s the two-strike approach. You have to put the ball in play, you can’t have strikeouts with runners in scoring position.”

BNL boasted a team batting average of .353 and averaged 7.5 runs per game. The Stars only committed 21 errors all season. They will look to increase team speed, switch to a small-ball approach (rather than waiting for the long ball) when necessary, and look at ways to protect Ratliff in the lineup.