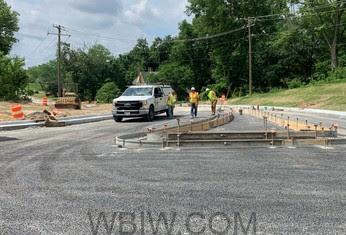 INDIANA – Striping crews are moving from the left lane to the right lane of S.R. 37 north of Martinsville, and expect to reopen all lanes in early July. Stay alert for changing traffic patterns and for work to shift traffic toward the inside shoulder.

Roundabout construction at Cramertown Loop is scheduled to close S.R. 252 today east of I-69. Crews will also be completing paving and striping for the nearby I-69 interchange at S.R. 252. Click here to learn more.

Concrete curbs have been completed where S.R. 39/Morton Avenue meets Rogers Road and the I-69 southbound ramps. Expect barrier wall removal, final paving, and striping work in the coming weeks.

Crews expect to open the new Bluffdale Drive access road extension in mid-June between Smith Valley and Fairview Roads. Watch for a small section of Knights Drive to be realigned this week just north of Smith Valley Road.

After the new Bluffdale Drive connection opens, Smith Valley Road will close west of S.R. 37. Access to the area during I-69 interchange construction will be from Fairview Road and Bluffdale Drive to the north or from S.R. 144, Huggin Hollow Road and Old S.R. 37 to the south. Click here for a side-by-side map of the traffic patterns this week and mid-June.

Interchange construction is also scheduled to close County Road 144 east of S.R. 37 in about two weeks. It’s expected to reopen later this summer across the S.R. 144 bridge over future I-69. Access will remain open at S.R. 144 west of I-69 and at Banta Road southeast of I-69.

Bridge replacement work has closed Mann Road between the I-465 ramps for up to four months. The detour follows Thompson Road, High School Road, and State Road 67/Kentucky Avenue.

.The I-465 westbound exit ramp is open to northbound Mann Road, and the I-465 on-ramp is open from Thompson Road and northbound Mann Road. Traffic in the area should expect delays for flaggers, temporary traffic signals, and construction traffic. Expect nighttime lane closures on the southwest leg of I-465 and seek alternate routes after 11 p.m. for 20-minute stoppages during Mann Road bridge demolition.

Each direction of S.R. 37 was shifted last week to a new elevated section of I-69 separated by temporary barriers. Traffic no longer stops between the Southport and Fairview road traffic signals.