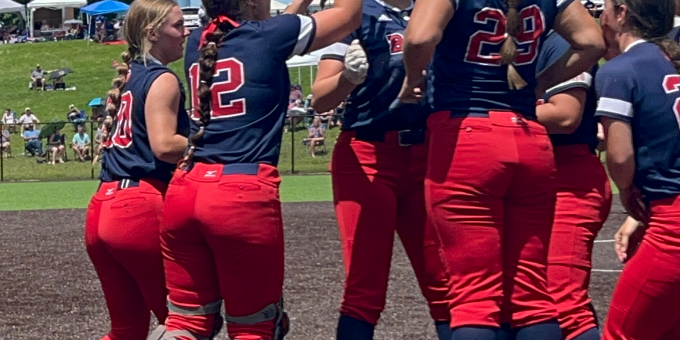 BEDFORD – Karissa Hamilton, a Miss Softball finalist and University of Kentucky recruit, might not know how to execute a proper home-run trot, but she has the fastest home-run sprint in the state. And with one thunderous swing, with a lightning-bolt drive over the left-field fence, she hammered No.5 Bedford North Lawrence out of the state tournament.

Hamilton’s lead-off blast in the bottom of the eighth inning powered No.10 Shelbyville to a thrilling 4-3 victory over the No.5 Stars in the Class 4A semistate semifinal at BNL on Saturday afternoon. The Golden Bears (24-5) advanced to the final to clash with No.1 Roncalli (a 7-0 winner over No.7 Pendleton Heights in the first semifinal) in the championship. BNL, heartbroken for a second straight season, bowed out at 28-3.

There might not be a tougher, more gut-wrenching way to lose. After trailing 3-0, BNL battled back to force extra innings, and a controversial overturned call in the top of the eighth killed a potential rally. Hamilton quickly ended that suspense, crushing an inside pitch and raising both arms in triumph as the ball screamed out of the ballpark. The ball had barely landed when she raced around third and got swallowed up by overjoyed teammates at home plate.

The irony of the moment – BNL had bludgeoned opponents with the long ball all season, only to get stunned by one – was heavy. The sting of finality – BNL lost a one-run game in the Elite Eight once again – was devastating. The unrestrained ecstasy of Hamilton and the Bears, making their first semistate appearance in program history, captured postseason softball’s essence.

“There were ups and downs, it was a very tight game,” Hamilton said. “We just stuck with it.”

Here’s the scene that will become immortalized in Shelbyville history. With a 2-0 count against BNL ace Annie Waggoner, Hamilton was expecting an inside fastball. She got it. Didn’t miss it. That wasn’t a walk-off bomb, it was a run-off as Hamilton zoomed around the bases. That’s standard practice for her, preferring to run away from the individual spotlight for team glory. But there was no escaping this moment.

“Annie was pitching me inside, so I was just looking for that really good inside pitch,” Hamilton said. “With that 2-0 count, I could expect anything. When she threw that one, I just thought ‘this is it.’ I just turned on it. And every time I hit a home run, I like to run pretty fast around the bases.”

“She’s been doing that a lot for us over the years,” Shelbyville coach Mark Hensley said. “She’s as good as it gets.”

Shelbyville took control with a three-run third inning. With one out, Kali Laycock caught one off the end of the bat and looped a single over third into left field. After Caitlyn Richardson sacrificed her to second, Hamilton was intentionally walked. Junior shortstop Kylee Edwards, destined for Mississippi State, stroked a RBI single to left, and Addison Stieneker followed with a soft single to right for two more runs.

BNL scratched back, piece by piece. In the fifth, McKaylin Turner dropped a bunt single, went to second on Carlee Kern’s sacrifice, stole third and scored on Waggoner’s single to left. In the sixth, Aliza Jewell slammed a lead-off home run to right.

And in the seventh, down to the final outs, BNL roared back as Lauryn Anderson – usually a slap hitter – belted a full-swing triple to the right-center gap, and she scored when Waggoner boomed a double off the fence in left. But Bears escaped more damage, leaving the bases loaded. That would be a talking point for the postgame.

In the top of the eighth, Kern walked, and Anderson chopped a ball to third. She was called safe when the throw got away from first baseman Kiley McIver (as Anderson hit McIver’s glove during a bang-bang play), but after an appeal from Hensley and an umpire’s conference, the call was changed as the first-base umpire ruled MvcIver held the ball long enough for the out to be recorded.

“And that’s probably the right call,” BNL coach Brad Gilbert said. “Here’s the bottom line. We didn’t get enough timely hits. We left too many runs out there. The longer we let this game go on, the worse it would be for us.”

BNL left 9 runners on bases, and left the bases loaded twice. BNL freshman slugger Ava Ratliff was intentionally walked four times – the ultimate sign of respect but a source of booing and ire for the BNL crowd that encircled the natural amphitheater. Waggoner was 3 for 4 and drove in a pair.

“We knew they were going to score,” Hensley said. “It was a matter of stopping the bleeding. We wanted to keep the ball in the park, and they have a girl sitting over there with 21 homers. We refused to pitch to her. Somebody else had to beat us, and they just about did. It wasn’t going to be her. I wasn’t going to be the one that pitches to her.”

Shelbyville starter Cheyenne Eads went 6 2/3 innings and struck out 11. Reliever Hailey Pogue earned the win with 1 1/3 innings of relief work. The Bears had only five hits against Waggoner (20-3), but the last one counted the most.

“You have to tip your hat,” Gilbert said. “They did what they needed to do to score the runs, and we didn’t quite get it done. It was a good comeback but we did not have the key hits when we needed them, when we normally get them.”

Shelbyville now has to tangle with top-ranked Roncalli.

“I don’t know., the tank might be dry after that one,” Hensley said. “We‘ll give it everything we have. I guess we’ll take our crack.”

Roncalli 7, Pendleton Heights 0 – In the first semifinal, the top-ranked Royals (31-0) advanced in defense of their state championship as ace hurler Keagan Rothrock struck out 13 while firing a complete-game 4-hitter. Tori Candler blasted a two-run homer for Roncalli, which extended its winning streak to 44 consecutive games. Candler also added a RBI single in the fifth.

In the final, Roncalli stopped Shelbyville 7-1, advancing to face Lafayette Harrison in the state championship.