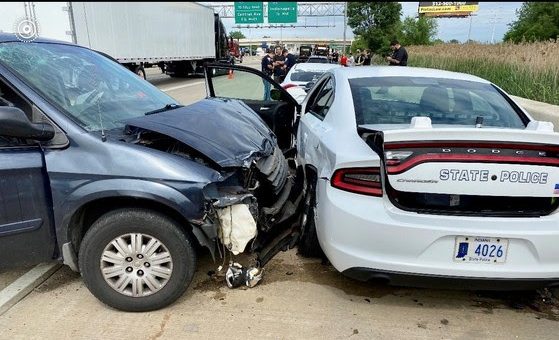 Preliminary investigation revealed that a 2007 Chrysler Town and Country, driven by Carey Carlson, 40, from Lake Station, IN, was traveling east on I-80 near the 10-mile-marker. For an unknown reason, the Chrysler ran off the left side of the road and struck the barrier wall.

The Chrysler then continued back into the lanes of travel and struck a 2021 Nissan Altima driven by John Ferrell, 74, of Augustine, OR. The Nissan lost control and came to rest on the left shoulder facing west.

Sgt. Fifield had his emergency lights activated at the time of the crash.

Sgt. Fifield and Carlson were transported by EMS to a Lake County area hospital with non-life-threatening injuries. None of the other drivers sustained injuries in the crash.

This crash is still under investigation, and there is no further information to release at this time.

It is believed that impairment is a contributing factor to the crash, however, troopers are awaiting toxicology results. Once the investigation is complete, it will be turned over to the Lake County Prosecutor for review and determination of charges, if any, to be filed.

Sgt. Fifield is a 24-year veteran with the Indiana State Police and serves as Public Information Officer for the Lowell Post.