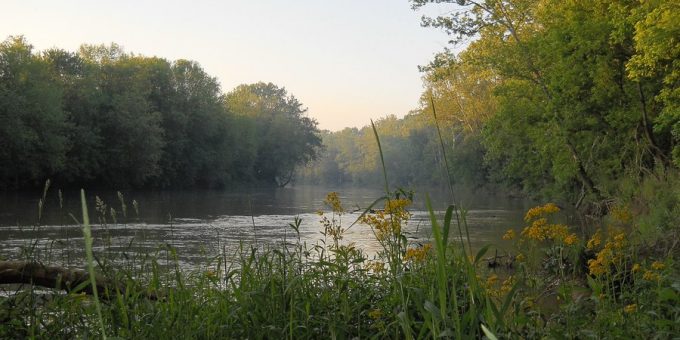 INDIANA – It has been said that no one ever steps in the same river twice. The adage may be doubly true in a time of persistent environmental change, as human and environmental factors influence these vital Indiana resources. Climate change is expected to increase the amount of precipitation in Indiana, and modern land-use practices contribute to a higher level of sediment in rivers. IU researchers are working to understand how rivers change over time to project how they are likely to evolve in the future.

IU researchers are looking at how rivers change through two different avenues: how rivers accomplish their meandering and how sediment moves from the hillslopes down into the streams that carry it away.

To better understand how rivers are changing and how sediments are entering rivers, the research team is using a drone equipped with an integrated lidar camera that uses laser light to measure the surface. The drone sends out 100,000 laser pulses a second, which allows it to capture a detailed model of the Earth’s surface and topographical variations that are difficult to measure using traditional techniques. The imaging allows the research team to strip away superfluous information and home in on high-value data.

Using the information obtained from over 100 flights, the team is creating topographical maps and models of portions of the East and West Fork of the White River to determine how rivers and the surrounding land change. The data is also being used to analyze the features that are present, drive numerical models of landscape evolution, and measure changes in topography.

So far, results from the study have shown that rivers meander due to variability in water level and elevation depending on flow conditions. An improved understanding of these factors can guide river management and efforts to restore the natural configurations of rivers. Additionally, by using the drone, the team has captured a detailed record of fallen trees along the hillslopes in south-central Indiana. This novel dataset is allowing the researchers to better understand the effects of the tree falls in the sedimentation process. Other investigations being pursued include how rivers respond to flooding from dam breaks and the morphology of hillslopes.

To augment its growing datasets, the research team continues to conduct drone flights within the state after trees have shed their leaves. The additional data is informing the team’s understanding of how river systems and landscapes change over time. When this foundational model is complete, the team will shift its focus to studying how climate change affects river systems. Both studies may result in findings that guide natural resource managers and restoration projects in the state and elsewhere.