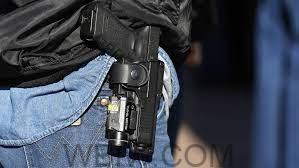 INDIANA — Indiana House Bill 1296, which was signed by Gov. Eric Holcomb in March, takes effect on July 1, 2022, allowing most people over the age of 18 to carry a handgun in public without a permit.

But that doesn’t mean you can just walk into a gun store and buy a handgun without a federally required background check before obtaining a gun.  Gun buyers must still fill out an ATF form and be screened against a national database at the time of purchase.

Gov. Holcomb noted exceptions to the new bill, saying people over the age of 18 are not automatically allowed to carry a handgun they must be considered a “proper person,” as defined by Indiana Code 2021. The exceptions include convicted felons and people with restraining orders or dangerous mental illness.

The Governor added the “proper person” list will be even more stringent come July 1.