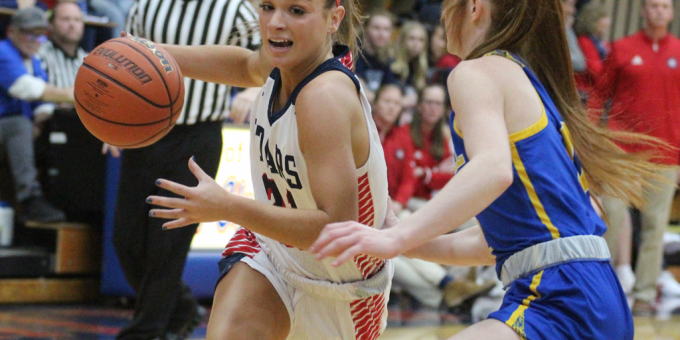 BEDFORD – Pressure is a part of Karsyn Norman’s uniform. Like shoes, her hair band and shooting sleeves, she doesn’t get dressed without it. That’s just part of the award-winning Bedford North Lawrence basketball collection.

Donning a jersey with “Indiana” stamped on the front? Just another day at the office for Norman, who will work from home when she joins the Indiana Junior All-Stars for Sunday afternoon’s interstate clash with Kentucky at BNL Fieldhouse. Norman, one of the core six selected to the elite squad, will be in the spotlight, where she usually excels.

The Junior girls will face Kentucky in the renewal of the series at 2 p.m., followed by the boys game. State pride? Indiana girls lead the intermittent series 9-1 (with games played from 2012-14 and 2018-19). Pressure? Norman, the heartbeat of BNL’s recent continued success, is the seventh Star to earn a Junior roster spot. BNL history is always heavy, so it’s nothing new for the deluxe point guard.

“I’m so excited,” Norman said. “It’s not only representing my state, but I get to do it in my hometown. There’s definitely a little bit of pressure that comes with that, but I feel like I usually perform well under pressure. So I’m super excited. It’s going to be a lot of fun.”

Norman’s resume is impeccable. She averaged 15.0 points, 3.0 steals and 2.8 assists as the Stars finished 24-3 last season, and she was named First Team in the Hoosier Hills Conference and Supreme 15 by the Indiana Basketball Coaches Association. The rest of the Junior roster includes familiar names, with a core group that includes Zionsville’s Laila Hull, South Bend Washington’s RaShunda Jones and Amiyah Reynolds, Northwestern’s McKenna Layden and Noblesville’s Ashlynn Shade.

“It’s a huge comfort thing,” Norman said. “I’m not stepping into some random all-star showcase where I don’t know anybody. That will help calm my nerves down. It’s almost like free play, but it’s with a lot of talented girls. It will be good. I will be playing with a lot of good girls and I don’t want to get shown up.“

While Kentucky’s roster is more of a mystery, it is loaded with equal talent, with three scorers who averaged over 20 points per game last season. Lawrence County’s Kensley Feltner led the state in scoring at 26.9, Rowan County’s Haven Ford totaled 20.4 points and 9.7 rebounds, and Mercer County’s Timberlynn Yeast averaged 20.9. Manual’s Jaykayla Thompson (17.1 points) already has offers from East Tennessee State and Cincinnati. The Kentuckians will be coached by Boyd County’s Pete Fraley.

“I’ve heard of some of the names,” Norman said. “Kentucky is a basketball place, too, so you know they will be good every year.”

“Our class is really good, but the senior class is good, too,” Norman said. “For that game, there’s not as much pressure. It’s not state versus state, it’s us getting them ready to go play for our state. So it will be really competitive, but it will be super fun.”

Another factor for Norman is the continuing college recruitment process. She has yet to make a decision. The added exposure of the Junior All-Stars, plus her play in AAU events all spring, will contribute to the interest of Div. I programs.

“I’ve started narrowing itdown a little bit,” Norman said. “That’s not something I’m worried about. But if I have a good game, it won’t hurt.”

Norman now stands alongside Fabrianne Perez (1999), Jenna Allen, Dominque McBryde and Alexa Bailey (2014), Jorie Allen (2018) and Chloe McKnight (2020) on the BNL list of Junior All-Stars. That’s a who’s-who of the program during this new century. The last five Stars to wear the Junior jersey went on to represent Indiana on the Senior version of the All-Star team.