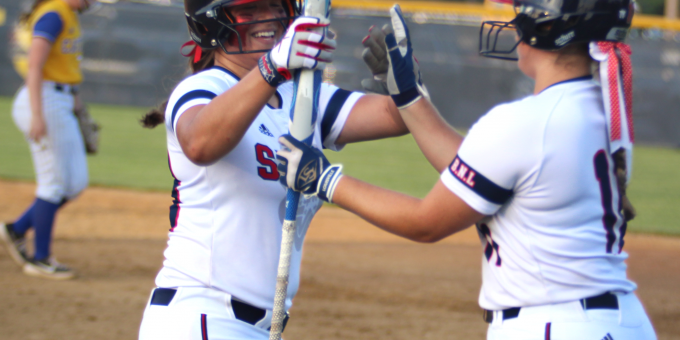 NEWBURGH – The problem with the “pick your poison” strategy? Either choice includes something poisonous, and Bedford North Lawrence’s offense is a den of vipers, poised to strike with fangs and venom.

Castle opted to intentionally walk BNL star slugger Ava Ratliff twice after her first-inning solo home run caused a few tremors on the Richter scale, and the Stars in the middle of the batting order made the No.13 Knights pay for the intentional slap, punching back with authority while powering BNL to an 8-1 victory and a Class 4A regional championship on Tuesday.

Braxton McCauley, Aliza Jewell, Carsyn (or Caroline, according to the public address announcer at the ballpark) Alvey and Maddy Bennett combined for eight hits and six RBIs, including the key strokes during a four-run third inning, as No.5 BNL roared to its second straight regional crown. The Stars (28-2) advanced to the two-game semistate at BNL and will clash with No.11 Shelbyville in the second game on Saturday.

Castle coach Pat Lockyear can’t be blamed for detouring around Ratliff. After all, the freshman phenom had burned the Knights with two homers during the season opener. So after she ripped her 21st blast of the season, a deep shot into the parking lot behind left field, for a quick 1-0 BNL lead, Lockyear was once bitten, twice shy. Not again.

But that backfired. McCauley, a Purdue recruit, banged a RBI double and Jewell smoked a two-run single during the third-inning eruption, Jewell cracked a run-scoring double and Alvey plated a run with a sacrifice fly following the second walk to Ratliff in the fourth, and Alvey – even though Castle didn’t know her name – made sure everyone knew her with a vicious line drive that skipped off the top of the left-field fence for a homer to complete a 12-hit attack.

“We’re not a one-kid show,” BNL coach Brad Gilbert said. “If they walk Ava, we have people behind her to drive her in, that’s what we have to do.”

It’s rather amazing that more coaches haven’t refused to pitch to Ratliff. She’s tied for the state lead in home runs, she just broke the school record for hits (that’s 50, shattering Jamis Mallot’s mark of 48 in 1997) and RBIs (that’s 53, topping Sarah Stone’s 49 last season). Once she clobbered that ball onto the asphalt in the first, McCauley was expecting the walks in front of her.

“I knew it was going to happen as soon as she hit her first home run,” McCauley said. “I was ready.”

“I should have done it the first time,” Lockyear said. “I really did make a mistake. Just giving up a run is tough against a team that good. But it didn’t work the other times, the kids behind her did well. You try not to let the best player on the other team beat you, and with a kid that’s hit 20 home runs you don’t want them to get that chance more than once.”

McCauley had the RBI to ignite the BNL brushfire and scored twice, Jewell was 2 for 4 with 3 RBIs, Alvey was 2 for 3, and Bennett was 3 for 4. Carlee Kern had the other RBI, driving in the final run of the third as BNL sent 10 batters to the plate and collected six hits that frame against Castle starter Brooklyn Ballis.

“We were a little bit tense, a little nervous,” Alvey said. “Once we got some runs, everyone eased up and played the way we normally play.”

“It’s amazing, a great feeling,” McCauley said. “It was very important to jump on them early, it set the tone real quick. It showed we’re a good team hitting.”

On the flip side, BNL ace Annie Waggoner (20-2) was not quite as brilliant as usual. She toiled while throwing 135 pitches, striking out 10 and scattering five hits. But she got some big outs, leaving the bases loaded in the fourth and stranding 10 total runners. Castle’s only run came on Emma Boyer’s two-out RBI double in the third.

“She was tired, she threw a ton of pitches,” Gilbert said after the 2:15 marathon outing. “That’s the most exhausted I’ve been. Man, we worked hard for that. But she found another gear and got it done, the defense played solid behind her.”

“She struggled, this was certainly not one of her better games,” Lockyear said. “But that’s a credit to her for hanging in there and getting outs. Really good pitchers find a way to do it.”

BNL will now seek its first semistate title. Shelbyville knocked off No.2 Whiteland 4-0 to win its first regional title and earn the date with the Stars. In the opposite bracket, No.1 Roncalli (a 5-0 winner over Avon) will face No.7 Pendleton Heights (which beat North Central 4-0 in that regional).

“Here’s the deal. I’m not proud of them for winning tonight, I’m proud of the work they put in all year. I’m just happy and excited for them. They got to experience what hard work does. There’s a lot of teams that work hard but don’t get to that level.”

BNL’s regional title was the third in program history.

“It’s really special,” Alvey said. “Not a lot of people thought we were going to be as good as last year. It’s a special feeling to do it not once, but twice in a row.”