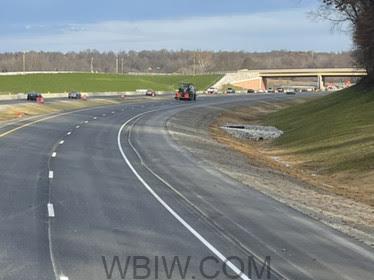 INDIANA – As sections of the I-69 Finish Line project open to traffic in Morgan County, you’ll see a new type of permanent pavement markings for the final traffic patterns. They’re highly visible at night and during wet conditions  – making it safer for both motorists and vehicles with automated lane-keeping features.

The application starts by grinding grooves into the pavement so the markings to set properly. Striping crews may use barrels to push traffic onto the shoulder temporarily during this process. The markings are formed at the factory and applied like large rolls of tape. On lighter concrete pavement, both black and white markings are paired together for improved visibility.

Unlike painted lane markings, once the tape markings are applied they’re immediately ready for traffic. Drivers can cross over them without the worry of roadway paint spilling onto the road or splattering their vehicle.

Crews will also be placing final pavement at the nearby I-69 interchange when traffic is lighter. Expect I-69 lane closures near S.R. 252 and one entrance or exit ramp to close each night.

The new Ruth Rusie Way entrance to the Artesian Square shopping center from Ohio Street is expected to open as early as next week. Construction of the new Bobby Helms Boulevard will close the back end of the Rural King parking lot behind Burger King.

New elevated I-69 pavement and bridges are expected to open midweek for southbound State Road 37. Southbound S.R. 37 will have access to Wicker Road using the new entrance and exit ramps, but not to County Line Road east of S.R. 37.

Click to read our update from last week for more information.

The Mann Road bridge replacement over I-465 is expected to begin on or after midday Sunday, June 5. Mann Road will be closed, but the I-465 ramps will remain open on either end. The detour will follow Thompson Road, High School Road, and S.R. 67/Kentucky Avenue. Click here to see a map of this and other traffic pattern changes.

Expect nightly I-465 lane closures for bridgework near Madison Avenue.

Late this week or early next week, trucks are scheduled to deliver and pump large amounts of concrete up to the new S.R. 144 bridge over the future I-69. Expect nighttime single lane closures on S.R. 37 near S.R. 144.

Daytime mowing continues in the work zone as weather allows. Please slow down and move over for maintenance crews.