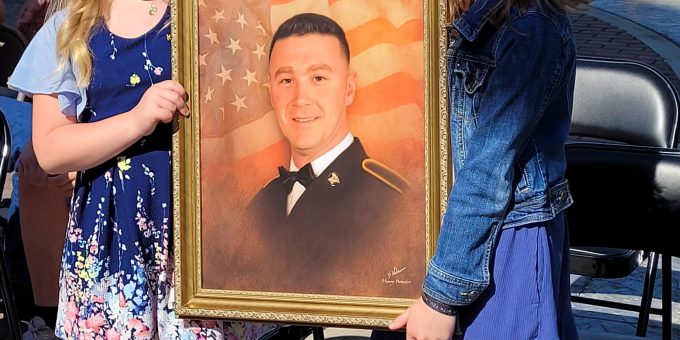 LAWRENCE COUNTY – Memorial Day provides the opportunity for the United States to honor and remember veterans who put their lives on the line to protect our nation’s freedom, and during the wreath-laying ceremony at the Lawrence County Courthouse those in attendance honored the service and memory of Dennis Daniel Wray Jr. who passed away this January.

Wray was born on June 20, 1983, and passed away while serving on January 30, 2022 and loved to serve his country. Finding the inspiration to serve at the age of 34, he became an AGR soldier with the duties at Joint Forces Headquarters, Indiana Army National Guard in Indianapolis.

Wray sadly passed away after suffering a stroke while serving during the COVID-19 Pandemic. He was a diligent worker who constantly worked to help those who needed it.

“He was a good soldier, and was recognized for his leadership capabilities during basic training,” said his wife Kendra Wray. “He received a lot of compliments for outperforming the other enlistees at his age.”

During the ceremony, his wife Kendra laid the ceremonial wreath while her two daughters Charlize and Gabriella laid the flags at the memorial at the Lawrence County Courthouse honoring those who have died in the previous wars of the past.

Members of the Bedford American Legion Gillen Post 33 performed the 21 Gun Salute in honor of all past veterans during the ceremony Monday.