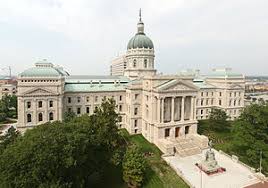 INDIANAPOLIS – The June calendar for Indiana Supreme Court Oral Arguments has been released, with the cases taking place in person and streamed digitally.

The June schedule is listed below:

Nicholson and three others (collectively “Nicholson”) sued the City of Gary alleging four different provisions of its 2017 “Welcoming City” ordinance violate state statutes that prohibit governmental bodies from restricting information sharing about a person’s citizenship or immigration status and from limiting or restricting enforcement of federal immigration laws. The State intervened, and the Lake Superior Court granted summary judgment for Nicholson, prohibiting Gary from enforcing parts of its ordinance. Gary appealed. The Court of Appeals found that only two limited portions of Gary’s ordinance violate state statutes, and it affirmed in part, reversed in part, and remanded with instructions. City of Gary v. Nicholson, 181 N.E.3d 390 (Ind. Ct. App. 2021), trans. pending. Nicholson and the State have petitioned this Court to accept jurisdiction over the appeal.

Dr. Mousa sued her former employer, Family Dental, and the Lake Superior Court awarded her $94,466 in unpaid wages, prejudgment interest, and liquidated damages. A majority of the Court of Appeals reversed the liquidated damages award, holding that Dr. Mousa failed to exhaust her administrative remedies under the Wage Claims Act when she did not first file a claim with the Department of Labor. Family Dental Care, P.C. v. Mousa, 180 N.E.3d 383 (Ind. Ct. App. 2021), vacated. The Indiana Supreme Court has granted a petition to transfer and assumed jurisdiction over the case.

When the housing authority took land through an administrative eminent-domain procedure, the land’s owner sued for injunctive relief and damages. The Lake Superior Court granted summary judgment to the housing authority. The Court of Appeals affirmed in part, reversed in part, and remanded with instructions to vacate the housing authority’s taking and valuation of the land and to hold any further proceedings consistent with the appellate opinion. 624 Broadway, LLC v. Gary Hous. Auth., 181 N.E.3d 1013 (Ind. Ct. App. 2021), vacated. The Supreme Court has granted transfer and assumed jurisdiction over the appeal.

Payne-Elliott, a teacher at Cathedral High School, entered into a same-sex marriage in 2017. Cathedral later renewed his teaching contract for the 2019-2020 school year but soon terminated his employment. Payne-Elliott sued the Roman Catholic Archdiocese of Indianapolis, claiming that it intentionally and without justification interfered with his contract and employment relationship by threatening to withhold its recognition of Cathedral as a Catholic high school if Cathedral continued to employ a teacher in a same-sex marriage. Citing several First Amendment doctrines, the Archdiocese moved to dismiss, and the Marion Superior Court dismissed the lawsuit with prejudice. The Court of Appeals reversed and remanded for further proceedings. Payne-Elliott v. Roman Cath. Archdiocese of Indianapolis, Inc., 180 N.E.3d 311 (Ind. Ct. App. 2021), reh’g denied, trans. pending. The Archdiocese has petitioned the Supreme Court to accept jurisdiction over the appeal.

Police received a tip that McCoy’s residence was being robbed and that McCoy had an outstanding warrant for his arrest. Upon arriving at McCoy’s residence, the police handcuffed and detained him. Without an advisement of rights, police asked McCoy if he would walk them through the house to see if any of his property was missing, and McCoy agreed. While walking through, police smelled the odor of burnt illegal drugs; they then obtained a warrant and found drug residue and paraphernalia in the house. The Cass Superior Court denied McCoy’s motion to suppress the evidence, and a jury found McCoy guilty of possession of meth and paraphernalia. The Court of Appeals affirmed in a memorandum decision. McCoy v. State, No. 21A-CR-2000 (Ind. Ct. App. 2022), trans. pending. McCoy has petitioned the Indiana Supreme Court to accept jurisdiction over the appeal.