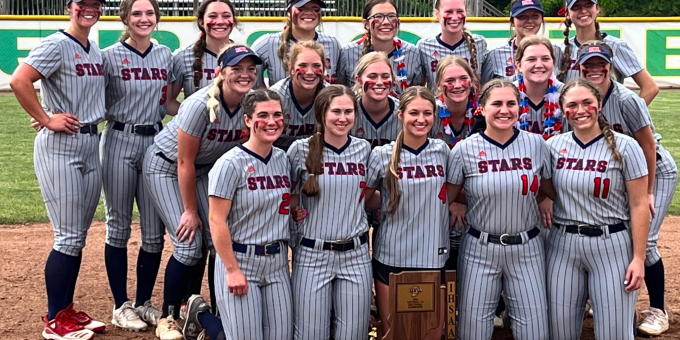 GALENA – The wait was worth it.

Patience, the most difficult of virtues to master, was rewarded as Bedford North Lawrence, which had to sit out three rain delays to defend its Class 4A sectional title, pounded Floyd Central in the semifinal, then shut down New Albany in the finale to win its 13th sectional crown in program history on Saturday.

No.5 BNL finally conquered the Highlanders 5-1 in the semifinal (which was originally scheduled for Wednesday but was washed out twice and suspended on Friday night), then battled past the Bulldogs 3-0 in the championship game. The Stars (27-2) advanced to the regional to clash with Castle on Tuesday.

Neither rain, nor stress, nor doom of New Albany right-hander Cheyenne Palmer could keep the Stars from their appointed round trips on the bases as they carried home the coveted hardware and won back-to-back sectionals for the first time since 1993.

BNL collected only three hits in the finale, but two of them were launched off rocket pads and off the property. Home runs by freshman phenom Ava Ratliff and right-fielder Aliza Jewell were the offensive fireworks, while ace hurler Annie Waggoner (19-2) twirled a one-hit masterpiece. BNL, the Hoosier Hills Conference champion, came into the tournament as the favorite and didn’t back down from the expectations.

“There was pressure,” BNL coach Brad Gilbert said. “We felt a little pressure. This week was like no other week, it was just crazy. So we’re excited that we won.”

The championship had to be won the hard way. Palmer, a junior who allowed only four hits during a regular-season loss at BNL (3-2 on April 12), was once again a force in the circle. She struck out 10, and against almost any other opponent that would have been good enough.

“Cheyenne was on,” Gilbert said. “We knew it would be a battle. And that’s the way a sectional championship should be. It was all about not getting frustrated with themselves. We did what this team has done all year, just grind it out.”

Ratliff, who is second in the state in home runs, connected in the first inning, ripping a 1-1 pitch deep over the left-field fence. That early blow set the tone.

“It started to get the energy going,” Ratliff said of her 20th bomb of the season. “We started out a little flat, so that started our energy.”

“The ball travels far when you square it up,” Gilbert said. “Ava let everyone take a deep breath, and the way Annie was dealing, everyone felt like one run might win it. But I’m glad we got another one.”

The other was huge. In the fourth, Braxton McCauley served a full-count soft single into left. Jewell followed with her thunderous blast to right for a 3-0 lead. She celebrated in the dugout with a forearm bash bump with BNL assistant coach D.J. West, who had to explain who the Bash Brothers (of Oakland A’s fame) were and why that was significant.

“It was a big moment,” Jewell said. “I was glad to get the stress off Annie, because a 1-0 game is hard to pitch. The coaches kept telling me to look for a pitch, and it was right there, and that was it. That felt really good.”

Waggoner, an Indiana State recruit, took care of the rest. New Albany (16-10) collected only one hit, a vicious liner by Palmer leading off the fourth that nearly ripped Waggoner’s glove off on its way to center field. Palmer got stranded at second, and that was the only base runner. The only other Bulldog to make any noise was Elizabeth Baxley, who clubbed a line drive that Kendall Graves snagged at third base in the fifth.

“I was just hitting my spots,” Waggoner said. “That was my main goal and I accomplished that.”

“She was aggressive,” New Albany coach Brookelyn Visker said, noting the 60 strikes (out of 79 total pitches) Waggoner delivered. “We just couldn’t hit. You have to make something happen. She did a really good job.

“Cheyenne missed a couple of spots, but she had a great day. They’re a good hitting team. For them to get three hits and score when they got on base, you have to tip your hat to them. They got the bats off their shoulders and made something happen.”

New Albany’s Ava Brewer made great catch off a Waggoner blast in the sixth, colliding with the fence in center to chase down a deep drive.

BNL 5, Floyd Central 1 – In the semifinal, the Stars – who owned a 2-1 lead when the game was suspended in the top of the fourth the previous night – struck for three runs in the top of the fifth to vanquish the Highlanders (20-12) for the second time this season.

Carsyn Alvey’s two-run home run in the second (following McCauley‘s lead-off single) accounted for the overnight lead. In the fifth, Carlee Kern reached with a one-out single that dribbled down the third-base line. Lauryn Anderson had a bloop single to short right, and Waggoner scorched a single to left center for the first run. Ratliff cracked a two-run single to center for the 5-1 lead.

Floyd scored in the second on Lavin Osborne’s lead-off homer to left. The Highlanders had a chance to claw into the margin in the sixth, with runners on second and third, but Waggoner fanned two hitters to escape unscathed.

“Had I known we were going to score, I would have slept better,” Gilbert said. “When it’s 2-1, and it’s Floyd (which currently leads the state with 62 home runs as a team), they’re one swing away. That was nice to see us come out and score some.”

BNL will not have long to celebrate before going on the road to defend its regional title. But the Stars were certainly thrilled to grab the hardware and plan the road trip.

“I don’t know how to explain it,” Jewell said. “It’s a great feeling.”

“It always feels good,” Waggoner said. “Everyone was rooting for us to lose, so winning this means we’re just as good – if not better – than last year.”