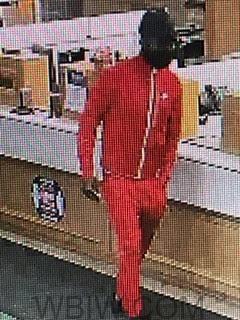 This morning at approximately 10:13 a.m., officers from the Auburn Police Department responded to a bank alarm at the Farmers & Merchant Bank located at 403 Erie Pass, Auburn.  Upon arrival officers discovered that a bank robbery had occurred, however, the suspect had already fled the area with an undisclosed amount of cash obtained during the robbery.

The suspect was described as:

The suspect is reported to have handed a note to a teller advising that he was armed and demanded money, however a weapon was not displayed.  After fleeing the building, the suspect is believed to have left the area in a silver passenger car (make/model unknown) heading westbound on Erie Pass.  There were no injuries reported in this incident, however, this suspect is considered armed and dangerous.

This is an ongoing investigation.  There is no further information to release at this time, however, detectives are requesting public assistance in identifying this suspect.

Anyone that may have information that may help with their investigation, please contact the Indiana State Police Fort Wayne Post @ (260)432-8661 (option 8) and ask for Detective(s) Jake Quick or Clint Hetrick.