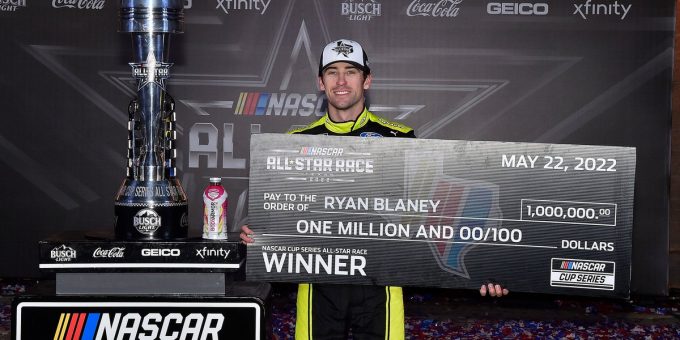 TEXAS – NASCAR fans witnessed one of the strangest wins in the All-Star Race Sunday night at Texas Motor Speedway,

Ryan Blaney was in the lead and was on the final lap of the race when Ricky Stenhouse Jr. crashed at the back of the field. Blaney was roughly less than 200 feet from taking the checkered flag when Stenhouse’s incident occurred — but by the time the caution lights went on, it appeared Blaney was already across the finish line.

Thinking the race was over when the caution came out and being so close to the finish line, Blaney automatically assumed that like a points race, the event was over under caution and he was the winner. Blaney pulled down his window net. That was against the rules, But with Blaney in the lead and the race going into overtime, he couldn’t return to pit road to get the net fixed.

After several moments of trying to do it himself still under the caution flag, Blaney finally rigged the net back in place and went on to win the race with a .266 of a second margin over runner-up Denny Hamlin.

Twenty-four drivers comprised the 38th running of the All-Star Race.

●  Harvick has made an appearance in every single All-Star Race in his 22-year career, the most of any active NASCAR Cup Series driver.

●  This was Briscoe’s first All-Star Race.

The NASCAR Cup Series returns to points-paying racing on Sunday, May 29 with the Coca-Cola 600 at Charlotte (N.C.) Motor Speedway. The race gets underway at 6 p.m. EDT with live coverage provided by FOX and SiriusXM NASCAR Radio.