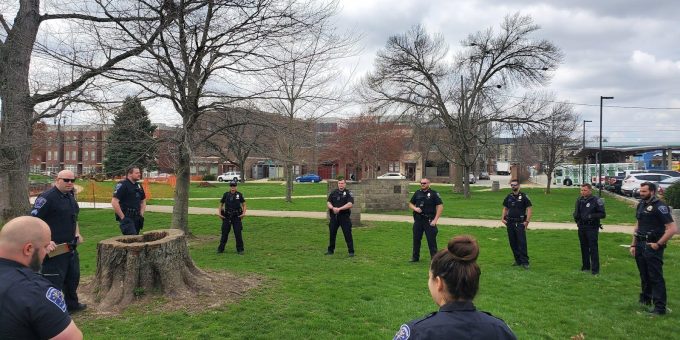 BLOOMINGTON – In an effort to better connect with the neighborhoods of Bloomington, the Bloomington Police Department (BPD) will soon begin conducting mobile roll calls throughout the City.

A roll call is when shift assignments are handed out and pertinent information is given to officers. Members of the community will be invited to attend when they see the Mobile Field Office truck to communicate their concerns with officers and to simply meet the people patrolling their neighborhoods.

As the mobile roll calls are implemented, residents should expect to see the Mobile Field Office truck as well as several patrol vehicles in parking lots around the City. These roll calls will occur during various shifts. Roll calls occur at 5:30 a.m., 1:30 p.m., and 9:30 p.m. Residents are encouraged to stop and visit with officers as they see the roll calls.

Further, anyone interested in touring the Mobile Field Office or in seeing the equipment in a patrol vehicle will be provided an opportunity to do so.

“Our community and this administration are very proud of our Bloomington Police Department and their excellent record of protecting the community,” said Mayor John Hamilton. “They have a tradition of excellence in recruiting and hiring strong officers and providing them with intensive training. The Department embraces accountability and
positive change, as they have demonstrated in their commitment to national standards found in the 21st Century Policing Report. The recent recommendations made by the Future of Policing Task are being acted upon swiftly and this move to increase communication between officers and the community at large is one that can only strengthen BPD and Bloomington as a whole.”

Increasing social or personal interactions between officers and the public at large was a key recommendation of the April 2022 inaugural report from the community-member-led Future of Policing Task Force. Mobile roll calls are one of several community outreach events planned over the next several months.

The Bloomington Police Department is proud of the work our officers do and enjoy meeting members of the community to engage in open dialogue to better understand and target the problems identified in our neighborhoods.