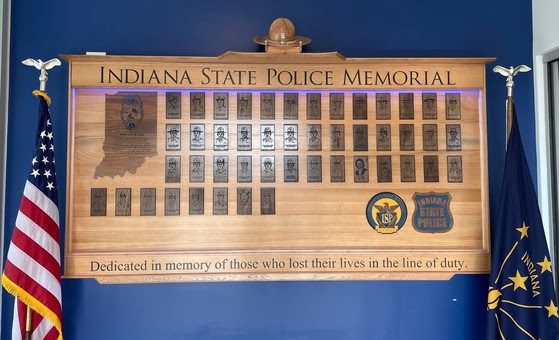 Since the early days of the Indiana State Police, memorial services have been held at all Indiana State Police Posts during the month of May. The memorial services are a way of paying tribute and remembering the ultimate sacrifice paid by state police employees who died while serving and protecting the citizens and visitors of Indiana. These services are also for the family members of the fallen heroes, reaffirming our commitment that their sacrifice as well as the sacrifice of their departed loved ones will never be forgotten.

Normally these services are held outdoors in proximity to each Posts memorial headstone, however, due to in-climate weather, Wednesday’s ceremony was held indoors. The service started with the troop formation called to attention and ISP Chaplain Daniel Coffey opening with a word of prayer.  Captain Kevin Smith, Area II Commander for the Indiana State Police, began a roll call of the fallen employees. Lieutenant Corey Culler, District Commander of the Fort Wayne Post, followed each name with a brief description of what led to the fallen employees’ final call. The solemn ceremony ended with the playing of Taps by an ISP Honor Guard bugler.

Since the agency’s inception in 1933, there have been five ISP troopers that have died in the line of duty here in the (current) Fort Wayne Post eleven county region:

In addition to the traditional memorial service ceremony, in honor of fallen Trooper Cory R. Elson, there was also a special proclamation and roadway dedication presented by the Allen County Commissioners.

The command staff here at the Fort Wayne Post would like to thank all of our guests in attendance today, especially the family members of our fallen, our ISP retirees, fellow uniformed officers from the Fort Wayne Police Department, Adams County Sheriff’s Department, Ohio State Highway Patrol, and all others that were able to join us today.

The Indiana State Police will always remember, forever honor, and respect those that serve in their memory.