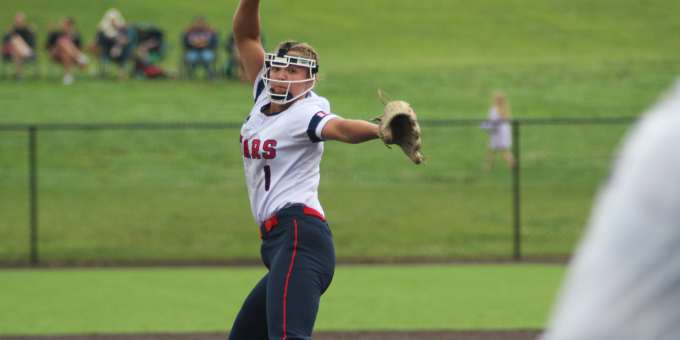 BEDFORD – So much for the theory about the difficulty of beating an opponent three times in a season. Bedford North Lawrence debunked that with emphatic force.

With a potent offense that scored in every inning, with ace Annie Waggoner in control in the circle, the 4A No.5 Stars finished a three-game sweep of Class 2A power Sullivan with an 11-1, five-inning victory on Wednesday evening. Waggoner also did a lot of damage with three hits and five RBIs as BNL (24-2) won its ninth consecutive game as it builds momentum for the looming postseason.

The first two clashes with the No.2 Arrows (22-5) were pitch-to-pitch battles between equally dangerous ballclubs. BNL won the opener 6-4 (on April 9 in Terre Haute) and the encore encounter 5-2 (on May 12 at BNL). With quality opposition at a premium, with sectional preparation in mind, the teams arranged another clash. This one was a not-so-close encounter of the third kind.

Waggoner sparked a four-run first inning with a mammoth home run to center, setting the tone for an 11-hit attack. She was her usual effective presence with the ball in her right hand, striking out six while improving to 15-2. But it was her 3-for-4 performance with her bat that generated the bigger grin from the Indiana State recruit.

“I was more proud of my bat,” Waggoner said. “I haven’t been hitting well the last two games, so coming out here and doing that was really nice.”

Waggoner’s two-run shot was followed by Ava Ratliff’s scorched double and Braxton McCauley’s hard single to single for the third run, and McCauley later scampered home on a wild pitch. That was just the start as BNL added three in the second. McKaylin Turner started the rally with a sharp single, Carlee Kern rapped a double to right, Lauryn Anderson plated a run with a ground out, and Waggoner chased home another run with a single to left. Aliza Jewell’s RBI ground out made it 7-0.

“Our kids are hitting well right now, a lot of confidence,” BNL coach Brad Gilbert said. “We’ve used the machine a lot to generate speed, and our kids are believing – with two strikes – they’re going to put the ball in play. They’re seeing the ball well.”

Sullivan got its run in the third on Avery Wiltermood’s towering home run to left. That’s two straight games she has homered against the Stars, but that would be the only time the Arrows hit the bull’s-eye.

BNL added two runs in the third – Anderson’s sliced double past third base and Waggoner’s RBI double to center – and another in the fourth – Carsyn Alvey’s fence-rattling single off the chains in left-center driving in the run. In the fifth, the Stars triggered the mercy rule, as Waggoner dropped a squeeze bunt to score Turner with the final run.

“If you look at Bloomington South (on Monday) and this game, those are good pitchers,” Gilbert said. “We jumped on them two games in a row.

“I‘m scared to death to even say anything, I don’t want to jinx us. But everything is gelling at the right time. As a staff, we’re really thrilled with our kids, the way they work hard and take care of business. It’s exciting to see.”

Wiltermood and Gracie Shorter had two hits each for Sullivan, which is looking to make another run to the 2A state final. At least BNL won’t be in its postseason path. The third time was not a charm.

“I was a little worried,” Gilbert said. “You never know.”

“It’s hard to beat a team three times, but we just came out here and did our thing,” Waggoner said. “We got the job done.”