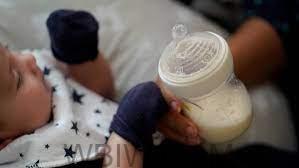 INDIANA – Nestlé is rushing baby formula into the United States via airfreight in a bid to ease a nationwide shortage that is unnerving parents around the country.

In a statement to CNN on Tuesday, Nestlé said it is flying in some baby formula produced outside the United States, including Gerber Good Start Extensive HA from the Netherlands and Alfamino from Switzerland.

Nestlé said it prioritized those products because they serve a “critical medical purpose” as they are intended for babies with cow’s milk protein allergies. The company had already been importing both of these formulas, but Nestlé said it is now expediting shipments to America.”We moved shipments up and rushed via air to help fill immediate needs,” the company said in the statement.

Beyond airfreighting some formula, Nestlé said it is running formula factories at capacity and accelerated product availability to retailers, online sellers, and hospitals for the most vulnerable.

The Biden administration is stepping up its coordination with the industry to try to address the shortage.

The American Academy of Pediatrics on Monday issued new emergency guidance for parents and caregivers of infants who can’t find a formula.

If you’re struggling to find baby formula during the shortage, here are some tips from Steven A. Abrams, MD, FAAP, that the academy said can help in urgent situations: