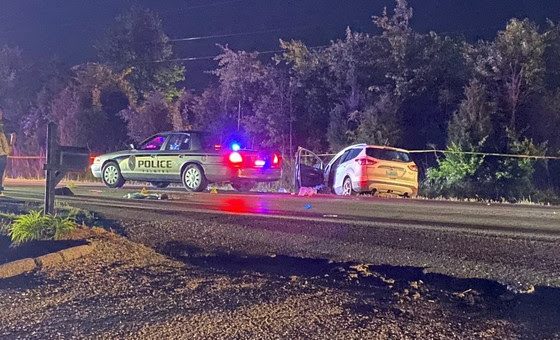 HARRISON CO. – May 16, 2022: Two individuals were killed Monday evening after police and Good Samaritans stopped to assist with an apparently stranded motorist.

Around 9:30 Monday evening, an officer with the Palmyra Police Department responded to assist a white Ford Escape stopped in the roadway in the twelve-thousand block of SR 135 south of Palmyra. The Escape was driven b y31-year-old Justin Moore, of Owensboro, Kentucky.  As the officer arrived, two Good Samaritans in a pick-up truck also stopped to assist. Within seconds of exiting their cars, shots were fired; killing Justin Moore and one of the Good Samaritans; 24-year-old Jacob Tyler McClanahan, of Corydon, Indiana.

Police and first responders immediately responded to the scene and attempted lifesaving measures but were unsuccessful. The Palmyra officer was transported to the Harrison County Hospital for minor injuries.

Harrison County authorities requested Indiana State Police investigate the shooting, and Detectives from the Sellersburg Post responded to the scene.

The investigation is ongoing and detectives and crime scene technicians are still on the scene. State Road 135 remains closed at the crime scene and will likely be closed for several hours.

Investigators have not released how many weapons were involved, how many shots were fired, or who fired the shots.

This news release will be updated as information becomes available. Autopsies have been scheduled for Wednesday.