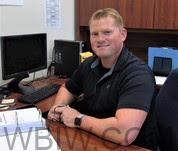 Jerry started his career as a correctional officer at RCF in 2007 after studying Criminal Justice at Ivy Tech Community College and Indiana State University. From the start, Jerry has excelled at any task assigned and displayed pride in his work along the way.

He has always been quick to share the knowledge he gains with his entire workgroup.  Jerry was quickly promoted to correctional sergeant, and then correctional lieutenant. Jerry became a member of RCF’s Emergency Squad (E-Squad), an elite team of correctional professionals who can be quickly assembled for emergency responses.

Jerry transferred from RCF to the Indiana Department of Correction’s Terre Haute Parole District in August 2016.  Although he was stepping into a new chapter in his career progression, he continued to work with RCF’s E-Squad in a leadership role. Jerry quickly established himself as a reliable member of the parole team efficiently and effectively carrying out his duties while assisting others to do the same.

In August 2020 Jerry transferred back to RCF in the role of Facility Training Coordinator.  Through hard work and dedication, Jerry became a subject matter expert at the instructor level in a multitude of correctional specialties, while maintaining an exemplary conduct record. Those attributes when coupled with his ability to easily communicate with nearly anyone made Jerry a natural fit for this position.

Up for debate is the supposition of whether great leaders are naturally born or developed through circumstance.  Regardless, Jerry is a unique leader.  One nominator may have said it best when penning, “People are always immediately drawn to Jerry because of his outstanding work ethic and his natural leadership skills.  He possesses an ability to radiate motivation to those around him, allowing them to perform their best.”