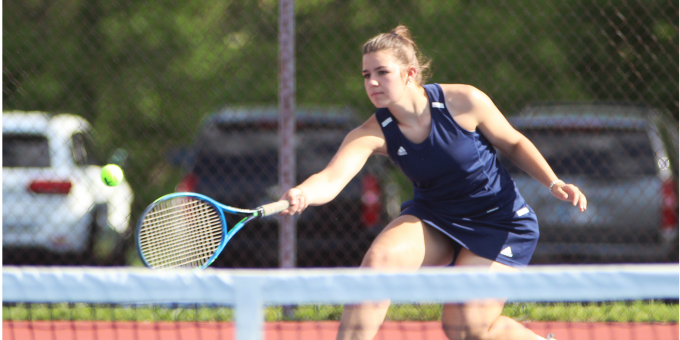 BEDFORD – Grantland Rice penned one of the great lines in sports history: “For when the One Great Scorer comes to mark against your name, He writes not that you won or lost, but how you played the game.” He never met Bedford North Lawrence’s Rachel Kidd, but she embodies that philosophy perfectly.

As the lone senior on the court for the Stars, Kidd has been thrust into the fire at No.1 singles, facing the best player from the opposition every match. So her personal record has suffered. That includes a straight-set setback on Monday afternoon, when BNL celebrated Senior Day for Kidd and Emma Salzmann (who competes on the junior varsity).

Yet she left content, in the fact she gave her all, in the fact her team won. The Stars concluded the regular season with a 4-1 triumph over Brown County. Kidd fell to BC’s Anna Stogsdill 6-1, 6-3, then looked back on a career that started in the sixth grade and includes two seasons at the top of the singles lineup. Perhaps she could have recorded more wins at a lower spot in the order, but Kidd is the obvious choice for the No.1 spot.

“For two years, she’s had the toughest assignment, and she takes that in stride,” BNL coach Joni Stigall said. “She’s my best singles player. She gives everything she has.”

Kidd, destined for Indiana University to study optometry, can see the big picture. She sacrificed for team success, thus allowing BNL to shine with a 12-5 record. She has learned difficult life lessons, smiling through all of the tough times.

”I’m ecstatic about the team,” Kidd said. “I’m really happy for my team. We’ve had a really good season. I’m super proud of them. Even if I have a loss, I feel the win for the team.

“It’s a team sport, but it’s also an individual sport. You’re always working on yourself so you can win your court. And I really like tennis here at BNL. We have a really good environment, great coaches, and I never don’t want to go to practice.

“Sometimes you really have to want it, you have to want to win and beat yourself, be better than you did the last night or the week before. Even if it’s super cold, or super hot, or you’re really tired, you have to find it in yourself to keep pushing. Your team might be counting on you. So it’s taught determination and how to fight through difficult things.”

BNL didn’t have too much difficulty with the Eagles. The Stars swept the doubles as Bella Stigall and Mallory Pride topped Katie Tipton and Mary Rygiel 6-1, 7-5 at No.1, while Kenley Craig and Izzy Alldredge quickly disposed of Julia Burt and Mattie Satter 6-1, 6-2 at No.2.

BNL also learned its postseason fate when the IHSAA announced the sectional pairings for the tournament later this week at Bloomington South. The Stars will clash with Martinsville in the opener on Wednesday. That winner will meet Bloomington North in the semifinal on Thursday. South will battle Edgewood in the other semifinal.

“We’d always liked to see North and South play each other,” Stigall said with a smile. “We have to play Martinsville. Let’s go play them, see what happens.”