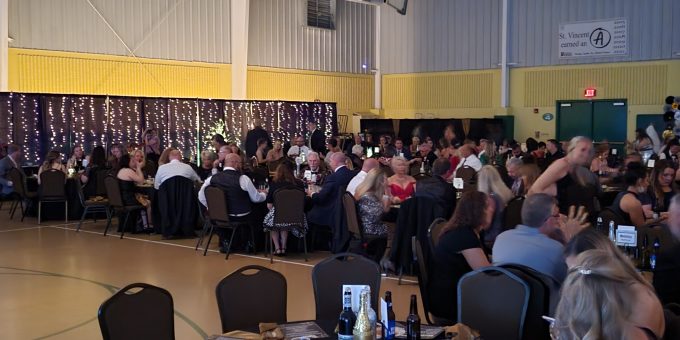 BEDFORD – The Lawrence County Cancer Patient Services (LCCPS) has worked hard at providing all of the necessary services for families in Lawrence County facing the difficult task of fighting cancer of all kinds.

The Relive the Night Gala Saturday night, offered the opportunity to raise funds for LCCPS to assist them financially as they continue to provide their services to the families in need, raising $43,000 during the event.

The Gala began at 5:00 p.m. and as attendees made their way to their tables, they were met by a silent auction, a photo booth, the food line provided by Golden Corral and served by members of LCCPS, and many different ways to raise money during the evening’s events.

The night included heartwarming stories of Penny Clark, and Charlie Tidd, two cancer survivors who shared their journey and the challenges they faced during their treatments. Most importantly, they shared how LCCPS was able to help them through their treatments by providing meals, gathering groceries, transportation to appointments and so much more.

Steve Chapman then shared the story of his wife Michelle, who sadly passed away in August of 2021. Steve shared what the couple had faced together and the last few months together before she passed. Michelle had often spoken about helping those affected by cancer once she beat the disease herself, and having her husband build a rustic, wooden American flag to be sold to raise money for cancer patients.

Steve stuck to that promise and built one that was then auctioned off during the Gala. Starting at $100, the amount rose steadily before stopping at $1,200. There was a serious battle between two attendees, who agreed to split the amount when Steve said he would build another to be sold at $1,200 apiece.

Attendees proceeded to play a version of heads or tails, where they would lose bead necklaces for every wrong choice made. The event left many laughing throughout, with a tight battle til the end.

The evening moved on to the dancefloor before crowning the King and Queen of the Gala. Charlie Tidd was named the King, and Penny Clark was named Queen during the night, in which the contest raised $17,000 alone towards the total of the night.

The event brought the community together to celebrate a great cause and raise money for a program that helps so many people in so many ways.

The night could not have come together without the great volunteers who made the entire event possible. These volunteers included Kellie Kemple, Dan Kemple, Teena Ligman, Holly Davis, Jennifer Diehl, Dee Batchelor, and Charles Cessna.