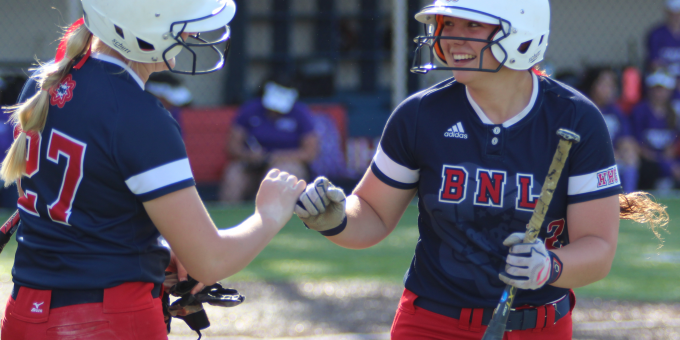 BEDFORD – Ava Ratliff kept running, oblivious to the chaos behind her in right field. As the fearless freshman got closer to third base, about ready to down shift the gears and settle for the safety of that station, she saw Bedford North Lawrence coach Brad Gilbert windmilling his arm. Keep going!

What? She questioned that move, as did her legs, but obeyed, churning back to full speed for the final left turn to home plate. Unbeknownst to Ratliff, her perfectly-placed, towering drive to the right-field corner was still being pursued. Who would have guessed, an inside-the-park homer run would be the way Ratliff broke a school record.

Ratliff’s round-trip dash was her 18th homer of the season, breaking the mark set by former star Sarah Stone just last season, and it lit the fuse on a 9-1 victory over Bloomington South (17-4) on Monday afternoon. Aliza Jewell ripped two homers, and Carlee Kern’s bomb to center shattered the team single-season record as the No.5 Stars (23-2) overpowered the Panthers.

For all the prodigious shots Ratliff has muscled over the fence, most measuring over 220 feet, it was a 195-footer that got her the record. Her deep drive to the corner, hugging the foul line, landed just fair as South right-fielder Jilliyn Gardner made a tremendous diving attempt to snag it. When Gardner landed on the turf, the blow knocked the wind out of her, and she was helpless as the center fielder raced over to collect the ball. By that time, Ratliff was racing home. She got there a little winded and thankful the pursuit of the Stone mark was over.

“I’m like ‘What is going on here?’” Ratliff said when she saw Gilbert waving and pointing. “I was running as hard as I could. I never thought I would break it like that. I think everyone had jinxed me, talking about it so much. I thought I had been cursed.”

That two-out highlight hit was only the beginning. The Stars scored five more in the first.

Braxton McCauley rifled a triple over Gardner’s head in right, and Jewell followed with her first jolt, a vicious line drive that barely got 10 feet in the air but left a vapor trail as it screamed over the fence in right for a 3-0 lead. “I couldn’t believe it went out,” Jewell said. Carsyn Alvey and Maddy Bennett then singled, McKaylin Turner reached to load the bases, and Kern scorched a single to left for the fourth run. Two more runs scored when Tori NIkirk’s pop fly to second base was dropped.

“We put the ball in play,” Gilbert said. “The thing I liked was the good two-strike approach, and there was a couple of times we didn’t hit it very hard, but we hit it over the infielder’s head for a base hit. And that’s what you have to do. So I was proud of that. And it seemed like that inning took forever.”

Kern’s drive, a solo shot in the third, broke the team record, and Jewell cracked her second in the sixth as BNL raised its season total to 47 (by eight different players).

“There’s a lot of pride,” Ratliff said. “It’s a group effort, it’s not just one person. Everyone feels good about it, we’ve all contributed to it.”

BNL’s other run, produced by singles from McCauley, Jewell and Bennett, came in the fifth. South’s run came in the second on a two-out RBI single by Akasha Burton.

Jewell (8-0) earned the win in the circle, going four innings and allowing only two hits. Waggoner worked the final three in relief for the save. Jewell was also 3 for 4 with the two homers. “It’s pretty nice,” Jewell said. “Honestly, I’ve just been focusing on hitting the ball, because I’ve been struggling a little bit.”

Ratliff and McCauley also had three hits each as BNL pounded out 15.

“We kept adding on, we didn’t just get six and stop,” Gilbert said. “I like talking about line-drive home runs. If we hit the ball on the nose and it carries out, that’s fine. And Carlee just squared hers up. Not that we worry about records, but it was nice to see Ava get that. Now we can not worry about it. Maybe she was pressing a little, but she’s pretty level headed.”

Ratliff is now second in the state (behind Corydon’s Bella Gerlach with 20) in homers.

The Stars will host Sullivan (facing the Arrows for the third time this season) on Wednesday.