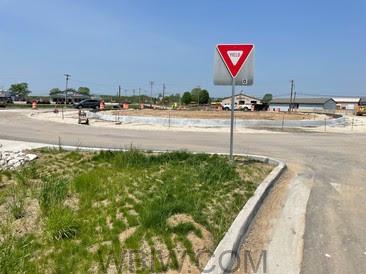 MARTINSVILLE – Bridge construction over the future I-69 north of Martinsville reached a milestone last week.

Night crews assembled and lifted structural beams into place at Myra Lane and an early morning concrete crew poured the bridge deck at Teeters Road on Wednesday.  The two overpasses and the Morgan Street connection west of I-69 are expected to open for traffic in late summer. They are the final pieces of earthmoving and road construction that began about two years ago.

To level out the terrain in the area, crews dug out large volumes of soil for the new I-69 lanes. Much of it was moved and compacted as fill for the Morgan Street roadbed and the two bridge embankments.

To learn more about the work planned this year and key dates and numbers for the project, view the 2022 Construction Guide and Infographic on the INDOT Project Documents webpage.

Crews are in the home stretch with the new Mooresville Road Bypass bridge over I-465. The crossing is expected to reopen for traffic early this week.

Click here to see a map of changing local detours in the area for the I-465 overpass replacement projects.

Another big traffic shift is scheduled for next week. S.R. 37 southbound traffic will use the new elevated pavement and bridges, and no longer stop for signals at Wicker Road and County Line Road. This will kick off several traffic pattern changes in the area. Wicker Road and Bluff Road traffic will use the new access road behind Glenns Valley Church to enter and exit S.R. 37 southbound. New interstate-style ramps will connect with a large roundabout at County Line Road west of S.R. 37.

Cranes will lift structural beams into place over I-465 this week for the new Madison Avenue bridge. Expect nighttime I-465 lane closures and 20-minute traffic stoppages. Nighttime closures of U.S. 31/East Street on-ramps to I-465 will also be needed.

To prepare for the S.R. 37 changes mentioned in Marion County, expect southbound traffic to be reduced to one lane during daylight hours late this week. Crews will be removing temporary barriers south of the Fairview Road stoplight where S.R. 37 traffic will shift.

The severe crash that closed S.R. 37 for several hours on Tuesday is a reminder for drivers to slow down and stay alert in the work zone. Local news media spoke with the Johnson County Sheriff’s Office, which is enforcing the reduced speed limit of 45 mph.

The I-69 exit ramps to S.R. 39/Morton Avenue are expected to reopen later today. A new roundabout will control where Morton Avenue meets Rogers Road and the I-69 southbound ramps.

Daytime crews continue to apply the finishing touches to this roundabout and other surface streets near the I-69 interchanges. Stay alert for flaggers and expect short traffic delays. Nighttime final paving and striping work at Ohio Street/Artesian Avenue is expected to close one I-69 entrance or exit ramp each night this week as weather allows.

Drivers should expect changing traffic patterns between Martinsville and S.R. 144 where S.R. 37 is reduced to one lane in each direction. Highway workers will be grinding the pavement and applying pavement markings, adding large stones to ditches for storm runoff, and mowing the grass.