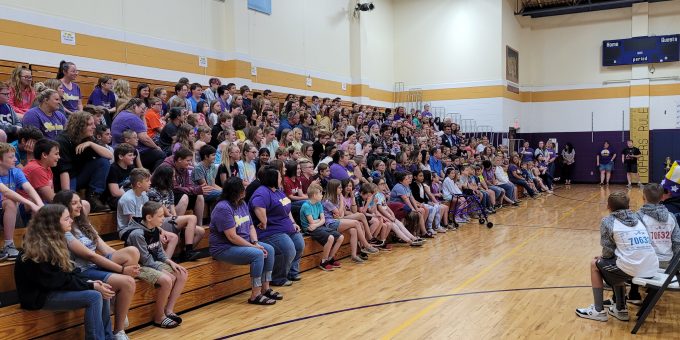 NEEDMORE – After a successful trip to Dallas, TX last week for the VEX Robotics World Championship, the team members were greeted Monday morning by the entire school, congratulating them on their accomplishments.

Starting their practices in September of 2021, their Coach Mrs. Lu Kuehn set her expectations for the team, which went above and beyond what she could have imagined.

“Starting this group in September, I could not have even imagined having our last practice for the season in May, let alone qualifying for the VEX World Championships,” said Kuehn. “Once we knew we were going to Dallas, I had set the goal of a top 10 finish, and these boys definitely surpassed that, and exceeded my expectations.”

The school decided on Thursday, May 12th, they would host a welcome home celebration in the school gymnasium to cheer for them and congratulate them on their success, something the team had no idea was even happening.

“We came up with the celebration last Thursday, where we would have the entire school set up in the gym and surprise the teams as they came back from a fake meeting with Mrs. Kuehn,” said Needmore Principal Susan Petty. “We had told the boys that they needed to prepare remarks for the newspaper, but instead it was to share with the other kids in the school, who want to be a part of this program moving forward.”

Each member of the team was awarded a trophy, two certificates (one from  State Rep. Chris May, and State Senator Eric Koch), a special trophy with their name and a ball used during the world championship tournament, and a main trophy that will stay at the school to remind them of their accomplishments. Nathan Tomlin also made a special trophy for Mrs. Kuehn, something she said she will cherish forever.

Mrs. Petty wanted to also thank the families, sponsors, NLCS School Board, Needmore Students, and team members for the success of the team and program this year.

“We couldn’t have done it without the help we received from everyone involved in this amazing journey. Thank you to this team for representing NLCS, Bedford, and Lawrence County by putting Needmore Robotics on the world map,” said Mrs. Petty.