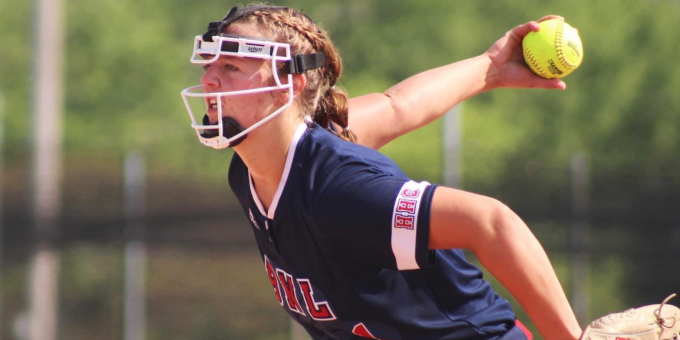 While the Class 4A No.4 Stars didn’t lose on the field, they lost a chance to upset the top-ranked team in the nation – according to MaxPreps – when a storm forced the cancellation of their highly-anticipated clash with 4A No.1 Roncalli in the second game of the Edgewood Invitational.

The spotlight was on the BNL-Roncalli battle. Roncalli (22-0) features flamethrowing hurler Keagan Rothrock, a Florida recruit who leads the state in strikeouts (245), wins (18) and no-hitters (6) with 13 shutouts. She has surrendered only 15 runs all season, and six of those were in the season opener against Pendleton Heights.

The Royals, who beat BNL 4-1 last year in the same tournament as Rothrock threw a one-hitter, owned a 1-0 lead in the third inning when lightning forced a delay, then the game was halted as a thunderstorm approached.

“It was exciting for a couple of innings, at least,” BNL coach Brad Gilbert said. “I liked the way we fought against her, we had three people put the ball in play. There’s disappointment because it’s the No.1 team in the nation and that games doesn’t happen very often.”

In the opener, Waggoner was in command, striking out 10, while silencing the Mustangs (12-12).

The Stars scored in the first when Ava Ratliff hammered a two-out triple to right and scored on Braxton McCauley’s single to right. BNL added a run in the second as Carsyn Alvey reached on an error and scored when Maddy Bennett belted a double to center.

But that was all the offense BNL could manufacture. The Stars collected 8 hits, and the Mustangs were guilty of 3 errors, but BNL left eight runners on base. McCauley, Ratliff and McKaylin Turner all had two hits, and Waggoner improved to 15-2 in the circle.

“We made adjustments but their pitcher was slower than we were ready for,” said Gilbert, who had the Stars primed against the pitching machine at 70 mph for the Rothrock encounter. “We had a bunch of ground balls to short.

“If we get a hit here or there, we blow it open. But Edgewood is solid. We’ll take it. We were attacking the ball on defense (Carlee Kern and Turner made sliding catches in foul ground), Annie threw well. And Aliza (Jewell) looked great in the second game. She was jamming them, so she looked sharp. It’s nice to see our pitchers throwing well.”