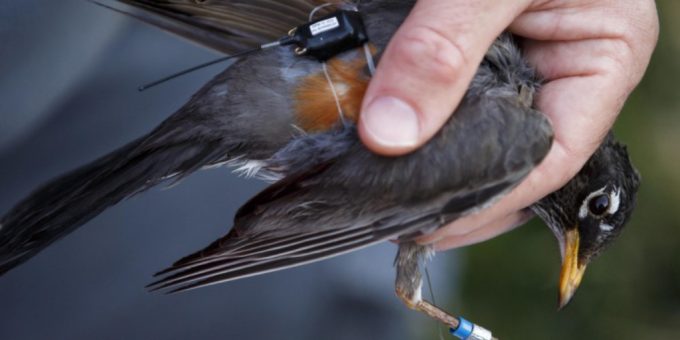 BLOOMINGTON – The COVID-19 pandemic reminded us that we are not immune to the spillover of zoonotic diseases. The need to understand and catalog how diseases jump from animals to humans, and how they may be affected by climate change, is more relevant than ever.

Robins, one of the most common birds in North America, are known for hosting and dispersing the pathogens that cause diseases like West Nile Virus and Lyme disease in humans. Robin migration patterns, however, are not fully understood, such that we still understand little about their potential to spread disease-causing pathogens. This is especially worrisome considering that climate change is predicted to modify their migratory patterns.

In order to prepare for both the short- and long-term effects of climate change, it is vital that we gain a more complete understanding of the role robins may play in spreading disease.

A team led by ERI Fellow Alex Jahn, Distinguished IU Professor Ellen Ketterson, and former postdoctoral researcher Daniel Becker, now of the University of Oklahoma, is partnering with researchers in the IU School of Public Health to study the migratory patterns and health of American robins across urban-rural gradients in Indiana.

The researchers capture robins at various sites in Bloomington, Ind. to check their health and collect blood for further genetic research. They also attach a GPS tracking tag to each robin, so that when it is released, researchers can track its movements. Fifteen robins from Bloomington have been tracked with GPS tags so far, with more to be tracked in the coming months. The team is also sampling robins and attaching tags to robins in Anchorage, Alaska to understand the potential for robins to disperse disease at higher latitudes.

This data is compared with similar data collected by collaborating researchers at Georgetown University, who are sampling robins in the National Mall and suburbs around Washington D.C., and by Becker’s team, who sample robins in Oklahoma. Information collected by this research network creates a more complete picture of robin migratory activity across the country and can help identify hotspots and transmission routes of zoonotic diseases carried by robins.

Data collected by this study shows that most robins that breed in Bloomington spend the winter near the Gulf of Mexico, anywhere between Florida and Texas, but that many stays in town year-round. This “partial migration” of robins in Bloomington appears to be unique among the robin populations the researchers in the network have been studying. All Alaska robins tagged to date have migrated to the Great Plains, as far south as Texas, whereas all the robins sampled in DC have spent the entire year in that vicinity.

This research can be used to identify regions of the country that are particularly vulnerable to the spread of zoonotic disease. For example, the data collected so far suggests a fairly high rate of exposure to the West Nile Virus among Bloomington robins. About one-third of robins surveyed had been previously exposed to this pathogen. This trend suggests that robins may be one of the primary hosts of this pathogen in south-central Indiana, allowing local agencies to make informed public health policy decisions that could reduce the risk of infection among people.

Additionally, because robins occur across most of North America and use many different habitats, including cities, the researchers are studying the potential for robins to act as sentinels of rapid environmental change, such as the impacts that urbanization has on the ecosystem health. They hope that robins can be used to infer how other, less common bird species, might be affected by rapid environmental change, which can help inform conservation strategies.

The researchers plan on continuing the work of this project under the newly established Midwest Center for Birds and Biodiversity.

What robins can tell us about environmental change?

Data from this study is not yet available to the public, however, there are plans to publish an online visualization of the migration patterns found by researchers.