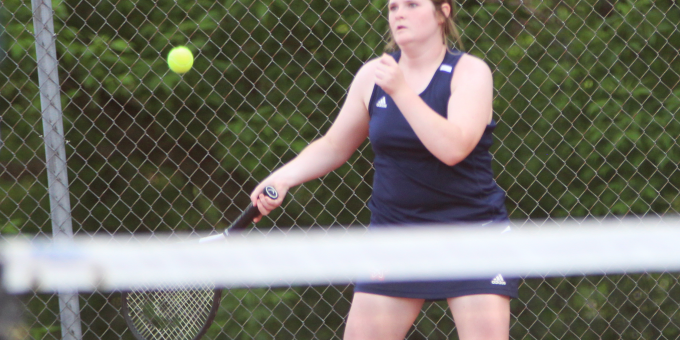 BEDFORD – If there’s anyone Bedford North Lawrence coach Joni Stigall can count on to handle the toughest situation, it’s her second doubles tandem. Her confidence in that duo was rewarded.

BNL’s Kenley Craig and Izzy Alldredge, with the team outcome resting on their rackets, pulled away in the third set to post the deciding point as the Stars fought off Paoli 3-2 on Thursday afternoon. BNL (11-5) swept the doubles and got a crucial singles point from Italy Lewis to fend off the Rams.

“We just got in a rhythm,” Alldredge said. “In that first set, we got down on ourselves. Once we won that set, we got back into hitting our volleys. We were back in it. Then Coach was like ‘I hate to tell you this, but it’s down to you.’”

Perhaps fatigue was the problem, with BNL playing its third match in four days. Perhaps, for one of the few times this season, BNL coach Joni Stigall had to address some issues with her duo.

“We’re very tired and it’s showing,” Stigall said. “It took them a lot longer to get in the groove. I wasn’t ever too worried. But they were very pouty, heavy footed, they didn’t have a lot of energy to play. We had to yell a little, talk about getting together and cheering each other on. They turned it around pretty quickly.”

Craig and Alldredge dominated the final set, with Alldredge hitting baseline winners and Craig poaching at the net as the Stars cut down on mistakes.

“I had to get out of my head,” Craig said. “I was making a lot of mistakes. I started playing. I was doing everything to try and get that match over.“

BNL also won at No.1 doubles with Bella Stigall and Mallory Pride stopping Gracie Brown and Tinsley Moffatt 6-3, 6-1. The third point came from Italy Lewis, who topped Amanda Bowles 6-1, 6-4 at No.3 singles.

The Rams took the top two singles with Maddie Warren conquering Rachel Kidd 6-4, 6-2 at No.1, while Rylie Atkins edged Nadia Anderson 6-3, 6-2 at No.2