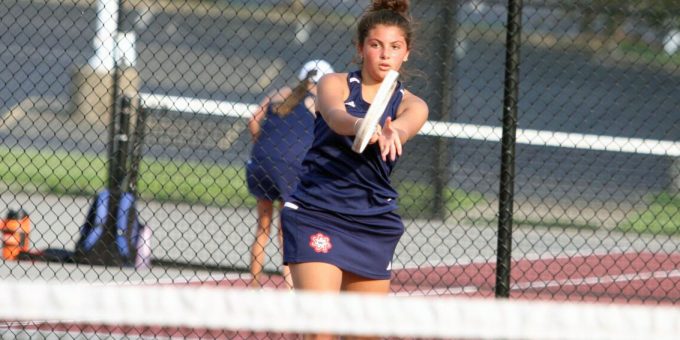 The Bulldogs swept the singles while advancing to the championship match. BNL’s only win came at No.2 doubles while slipping to the third-place consolation match.

BNL’s Kenley Craig and Izzy Alldredge went the distance for a thrilling victory over Maci Crone and Corinne Miller, recording a tough 6-4, 6-7 (2-7 in the tiebreaker), 6-4 win. But the Bulldogs, who also topped the Stars 4-1 during the regular-season clash on April 23 at BNL, won the other third-set decisions.

“The bad thing about this game is that the score doesn’t always show or reflect the play,” BNL coach Joni Stigall said. “We played so well. I never want a 4-1 loss, but tonight is just different. When you see the fight and the improvement in your team from even just a couple of weeks ago, it feels like a win. I love this team.

“New Albany fully expected a 5-0 blowout on every court, but we had other plans. Like I always say, my 2 doubles are good. They made a lot of errors tonight, but they can always pull through. Where one struggled, the other picked up. They work well together, and they are just smart and skilled and hard to beat in that position.”

“Nadia was great,” Stigall said. “We are talking about a girl who has just played a couple of varsity matches. She came in tonight knowing there were going to be distractions to overcome. She did that. She took a good player to a third set and made a really good run. She admittedly got tired but I’m proud of her and what she’s accomplishing.

“Our 1 doubles played better than they have in a long time. This New Albany doubles was a semistate team and has every intention of going to state this year. They are good, really good, but so are we. The first set does not show the play at all. A million deuces were played, we won a ton of points. The second set they showed a growth and maturity I haven’t seen yet this year. And then in the third, they were up. The play experience of New Albany took over. But it was a fantastic match to watch. It felt like a win.”

“Rachel played Claire, who is probably the best player in the conference,” Stigall said. “When you play players who are just better than you, you just play through it and learn from it. Rachel does that. Our team owes her much gratitude for the position she plays and the grace in which she plays it. Her playing in that spot makes all the other spots line up to give us success.

“Italy played a very similar player to herself. It was more about who got one more ball over the net. She didn’t lay down, she just got beat. If we play hard and we get beat, then that’s just part of the game.”

BNL will face Floyd Central in the third-place match at BNL on Friday. The Stars will also host Paoli on Thursday.