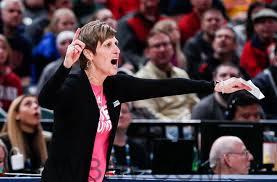 BLOOMINGTON – IU Women’s Basketball head coach Teri Moren will be joining USA Basketball’s U18 National Team as an assistant coach. The move was made in preparation for the U18 FIBA Americas Championship event, which is set to begin on June 13th.

Moren will be coaching alongside fellow assistant DeLisha Milton-Jones (Old Dominion) on head coach Joni Taylor’s (Texas A&M) staff. Team USA will begin its quest for an 11th-straight gold medal when they meet for trials at the end of this month.

According to officials, Moren has the winning pedigree to coach for Team USA (170+ wins at IU, 7-straight 20-win seasons, back-to-back Sweet Sixteens), but she also possesses the player development skills needed to work with young athletes.

IU starting lineups have been on the older side over the past few seasons because they’ve been full of players who have developed and grown tremendously during their time in Bloomington. Mackenzie Holmes has upped her PPG from 10.8 to 15 in two seasons, and Grace Berger has bumped her FG% from 42 to 45 in three.

Officials say Moren knows how to help her players reach their full potential. The emergence of Chloe Moore-McNeil this past season should both excite and inspire prospective Team USA players.