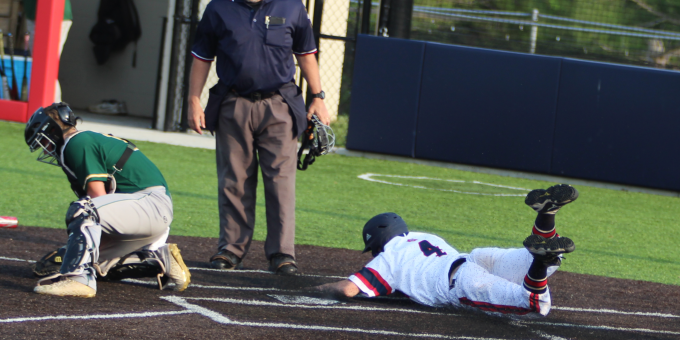 BEDFORD – Only once did Floyd Central score when making contact with the baseball. Just one look was all it took for the Highlanders to deck Bedford North Lawrence in the consolation round of the Hoosier Hills Conference tournament.

Dylan Hogan’s three-run home run to left capped a four-run rally in the top of the seventh, powering Floyd to a 5-3 comeback win over the Stars on Wednesday afternoon. The Highlanders (13-6) collected only three hits, but the Hogan bomb was the devastating blow as BNL (10-12) fell into the sixth-place game in the league test.

Floyd’s late rally spoiled a quality performance by BNL starter Cade Mungle, who was wickedly maleficent and marvelous for six-plus innings, surrendering only two hits while fanning five. But after he started the seventh with a hit batter and 2-0 count on the follow-up batter, he exited for freshman Cal Gates, making his first mound appearance since April 18. Gates balked in a run, allowed a walk and hit a batter, and Hogan hammered the first pitch he saw in the frame for a mammoth blast and the go-ahead runs.

“Unfortunately it got away from us in the seventh,” BNL coach Jeff Callahan said. “Kid hit it out of the park. It happens.”

Floyd took an early lead in the second, although came away disappointed with only one run after loading the bases (two walks and bunt single) with no out. Mungle walked in the run but got two strikeouts while escaping more damage. After that shaky start, Mungle was masterful, allowing only Hogan’s lead-off double in the sixth.

“Their kid threw a good game,” Floyd coach Casey LaDuke said. “He struggled at the beginning, and we had him on the ropes. We didn’t do our job, and he battled, threw a heck of a game.

“We just lacked enthusiasm. I know it’s a tough road trip, but you just have to do it. Finally we battled back. It’s hard, but we don’t have any choice. In life you don’t have choices, that’s what you teach the kids.”

The Stars took the lead in the second when Kaedyn Bennett singled to right, Ryker Hughes walked, and Mungle slashed a two-run double to left. BNL added another run in the fourth when Kylar Fisher singled, Bennett dropped a perfect sacrifice bunt, and Kline Woodward roped a RBI single to right to chase home pinch runner Carter Bennett. But that wouldn’t be enough.

“We had some chances early in the game to add that extra run, and didn’t get it done,” Callahan said. “We did a lot of good things. We leave here disappointed we didn’t win the game, but we walk out of here with a better understanding of competing and giving ourselves a chance to win. That was good to see.

“Defensively we played a lot better (no errors, with Fisher making two outstanding catches of line drives at shortstop) and Cade pitched well.”

Gates and Kaedyn Bennett both had two hits for the Stars.