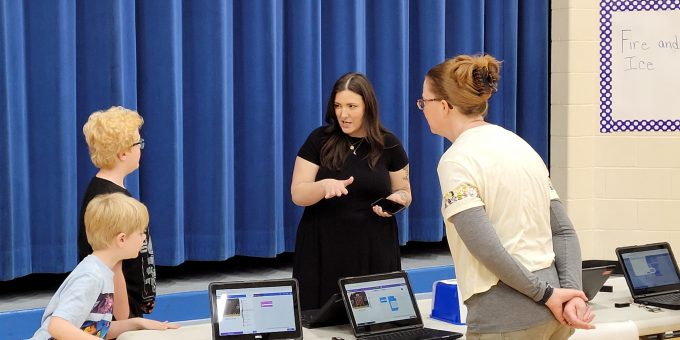 MITCHELL – Students at Burris Elementary School were able to interact with equipment and show their families what they have learned in STEAM with Mrs. Reed through the school year.

“I love being able to have the students come out and show what they know to their parents,” said Mrs. Reed. “In the past elementary schools had computer lab, STEAM has completely replaced that in Burris and Hatfield schools as technology pushes forward into the tech industry. I have kindergarteners who can code at the same level as some of the eighth-graders at the middle school, so it is really impressive to see what they are capable of.”

Students worked with stations that included Ozobots, Cubetto, Cubelets, Scratch coding, and Code.org. The kids became the “teachers” while their families became the students at each station.

Third Grader Owen, showed his parents James and Julie Freeman and his brother Grant how to use the Ozobots and even how to code on the computers to make shapes and 3D images.

“I like all of the stuff we do in class with Mrs. Reed. I am excited to use 3D printers next year and being able to create things and see how they work is really fun,” said Owen.

The program received a $5,000 grant from United Way of South Central Indiana, to go towards new equipment and expand on the learning possibilities that STEAM can provide to these students. The ceiling is high, but these students are ready to burst through the roof with what they can accomplish.