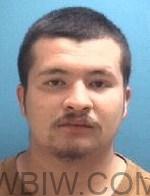 COLUMBUS – A Columbus man was arrested after he was driving drunk and crashed his vehicle and injured his child.

According to Columbus Police Department reports, officers were called to the area of 10th Street and Central Avenue at about 11 p.m. Friday night after witnesses reported a driver fleeing the scene of an accident.

Police located the vehicle a few blocks away and the driver 20-year-old Pablo A. Calderon Lasaro was holding his one-year-old child who had been injured in the crash. The child was treated for minor injuries at the scene and then released to family members.

Police say Lasaro was intoxicated and smelled of alcohol.

Police say Lasaro failed several field sobriety tests and was taken to Columbus Regional Hospital to have his blood drawn.

He was then arrested on preliminary charges of operating a vehicle while intoxicated with endangerment, child neglect, leaving the scene of an accident, and illegal consumption of an alcoholic beverage.