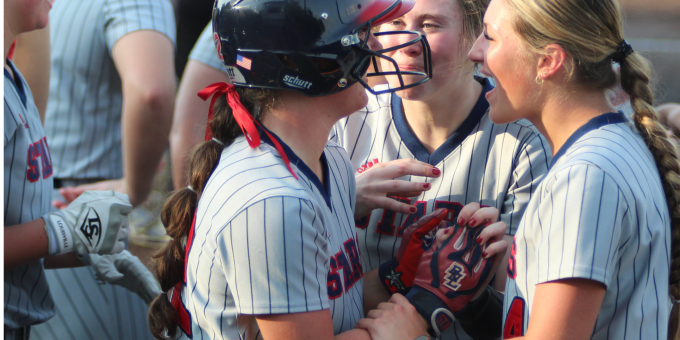 BEDFORD – And the last shall lead them to first.

McKaylin Turner, stationed ninth in the batting order, joined a special sorority, slugging her first home run of the season to cap Bedford North Lawrence’s power surge to the Hoosier Hills Conference championship. And the Stars didn’t share this one. Rather selfish, but rather sweet.

Turner and Carsyn Alvey, seniors who helped BNL make history, blasted bombs as the No.4 Stars smacked Seymour 7-0 on Tuesday evening, completing a perfect six-game sweep through the league while winning the second straight title and fifth in program history. Last year’s was shared when BNL stumbled at Seymour in the finale. That wasn’t going to happen this time.

Annie Waggoner made sure of that, twirling another masterpiece in the circle. She allowed only one hit while striking out 10, going the distance for her 14th victory of the season. Braxton McCauley drove in two runs, and the blasts by Alvey (solo in the fourth) and Turner (3-run dinger in the sixth) finished off the Owls (11-8).

Start to finish, the Stars (20-2) were not to be denied, not this time. That 8-2 setback at Seymour a year ago haunted, humbled and hammered them to the finish line.

“We don’t set a ton of goals,” said BNL coach Brad Gilbert, who got dunked with the traditional water cooler christening following the triumph. “We want to compete every game, that’s our big goal. Winning the conference outright was definitely one. We’ve had this game circled. We didn’t play well over there last year, so it’s one we wanted. We didn’t want to share it again.”

“It feels good, because all of us worked really hard to get to this point,” Alvey said. “It means a lot to everyone on the team.”

BNL scored in the first when Waggoner whacked a double to the right-field fence, and McCauley dropped a fly ball into short center for the RBI. In the third, Waggoner cracked a double to left-center, feared freshman slugger Ava Ratliff was intentionally walked, and McCauley made that decision backfire when she stroked a sharp single to right for another RBI. She promptly stole second, and pinch runner Britta Warren trotted home from third when the throw to cut down McCauley sailed long into the outfield.

Then came the power patrol. Alvey swatted her lead-off drive to left for a 4-0 lead in the fourth. Turner, the last BNL starter (other than slap hitter Lauryn Anderson) to connect for a homer, ripped her bomb to left for a 7-0 lead and set a record for the fastest home run trot.

“I wasn’t really trying to hit one,” Turner said. “It just came off the bat, felt good.”

“It was really good to see,” Gilbert said. “McKaylin has put the ball in play a lot without a lot to show for it. She has fought and fought. It’s great to see them do that and get some confidence for the tournament coming up. We need to have everyone clicking on all cylinders.”

Waggoner certainly was. Seymour’s lone hit was Abby Followell’s sizzler into left with two out in the fourth. The Owls caused a lot of lost ball into the woods down the left-field line as Waggoner pounded the inside corner with precision and purpose.

“I don’t know what to say about Annie that we haven’t said,” Gilbert said. “She just keeps dealing. She looked really sharp. That’s what great pitchers do, they get ahead (Waggoner threw strike one on the first pitch to the first 11 batters and 21 total) and then we can toy around. She pitched really well.”

“Our kids made adjustments,” Gilbert said. “We put the ball in play hard.”

“It’s definitely special, winning it outright,” Turner said. “It feels really good. We were ready for this game.”

The Stars will host Sullivan on Thursday.