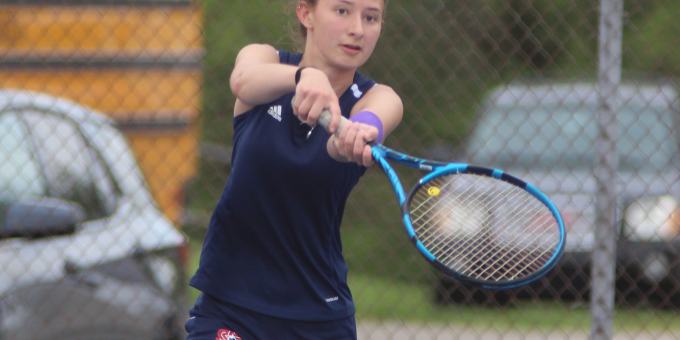 NORTH VERNON – Bedford North Lawrence went the distance for a deciding point at No.1 doubles as the Stars edged Jennings County 3-2 in the opening round of the Hoosier Hills Conference tournament during girls high school tennis action on Monday.

BNL’s Bella Stigall and Mallory Pride struggled with their consistency but rallied for a 6-7 (4-7 in the tiebreaker), 6-4, 6-2 win over Jennings County’s Lucy Brown and Maria Alberti, powering the Stars (10-4) to the semifinal round against New Albany.

“That one was exhausting,” BNL coach Joni Stigall said after the three-set marathon determined the victor. “That was the most ugly match I have ever seen them play. We couldn’t hit balls in or over the net, we couldn’t serve or volley. Somehow they won. I hope that’s out of their system.”

BNL, which clipped the Panthers 3-2 at BNL on April 19, also won at No.2 doubles. Kenley Craig and Izzy Alldredge rolled past Caitlyn Schuck and Amy Vogel 6-1, 6-4.

“They just take care of business,” Stigall said. “I never even talked to them during their match. I just have that much confidence in them in that position. They play more like most 1 doubles teams, so my comfort level with them is very high.”

The third BNL point came from Italy Lewis at No.3 singles. She stopped Mia Silvey 6-4, 6-1.

“Italy played really well, even through a migraine had her very sick after,” Stigall said. “She’s really doing her job, and that’s what we need from her.”

“Rachel and Nadia just played players who were better players,” Stigall said. “That happens. They both played well their entire match but just didn’t quite have the firepower as their opponent. If we, as a team, cut back on double faults and unforced errors, we will be a much harder team to beat. We’re getting there.

“New Albany is extremely tough and we have to figure out how to ride a long way in a bus and come off ready to play.”