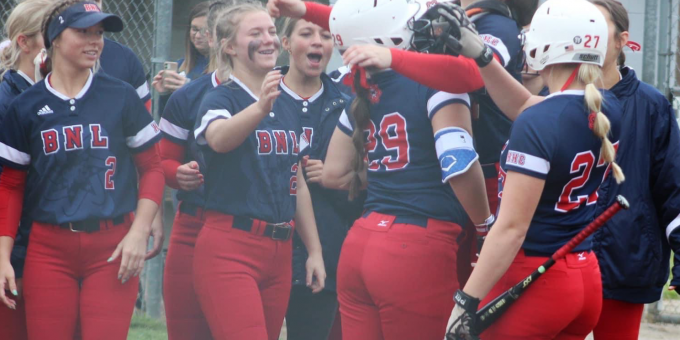 CORYDON – In a clash featuring two feared sluggers that currently lead the state in home runs, Bedford North Lawrence went a little deeper in the lineup to go deep for a quality road victory.

Carsyn Alvey and Braxton McCauley were the sultanas of swat, clubbing solo homers to back the shutdown hurling of Annie Waggoner as the Class 4A No.4 Stars conquered Corydon 4-1 on Saturday afternoon. Waggoner fanned 13 and escaped a late jam, powering BNL (19-2) to its fourth win in five days.

While BNL’s Ava Ratliff and Corydon’s Bella Gerlach, who have both blasted 17 bombs this season, demanded most of the attention on the scouting report, it was Alvey and McCauley who did the long-ball damage. Alvey crushed the first pitch she saw leading off the third, and McCauley hammered her seventh of the season leading off the fourth.

“Carsyn put a great swing on it,” said BNL coach Brad Gilbert, whose club has now launched 40 out of the park this year. “Braxton got a nice pitch to hit and turned on it.”

BNL’s other runs were more conventional but no less effective. In the fifth, McKaylin Turner drew a walk and Lauryn Anderson bunted her to second. Turner took third on Waggoner’s groundout and trotted home on Ratliff’s RBI double to left.

In the seventh, Turner was again the instigator as she walked, went to second on a wild pitch and scored on Waggoner’s RBI single.

The Panthers (15-7) finally broke through in the seventh with consecutive singles by Avery Adams, Addyson Leonard and Kylie Mathes. After a bunt moved runners to second and third with one out, Waggoner finished off her 13th win of the season (which ranks her second in the state) with two strikeouts.

“Annie did a great job,” Gilbert said. “She was throwing hard and mixing pitches well. We were painting the outside corner. She shut them down.”

Waggoner had two hits while Ratliff’s RBI raised her season total to 43 (second in the state). Corydon hurler Bailey Orme (7-1) suffered her first loss. Orme and Leonard had two hits each.

“That was a strong team, a quality team,” Gilbert said. “They have two really good pitchers, so we knew it would be a challenge. It’s been a grind the last three or four days, with the rain and everything, and I’m proud of the kids for the way they came out ready to go. I was worried about fatigue but they gave everything they had.”

BNL will host Seymour, with the Stars looking to win the outright Hoosier Hills Conference title, on Tuesday.