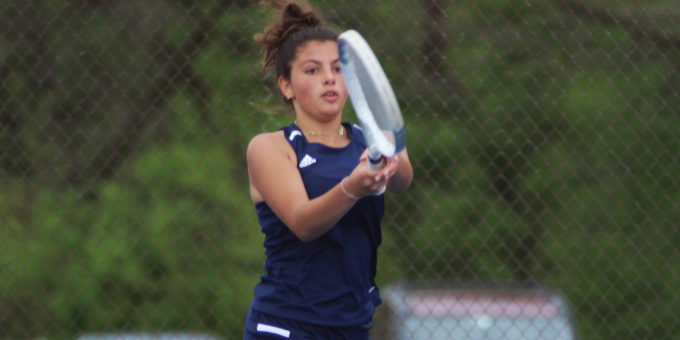 BEDFORD – Bedford North Lawrence couldn’t quite beat the rain on every court, but that’s the only thing that slowed down the Stars during a conquest of Columbus East on Friday evening.

Before the wet asphalt courts got too slick, the Stars were too slick for the Olympians while posting a 4-0 victory. BNL dropped only eight games in those four matches, while the battle between BNL’s Rachel Kidd and East’s Katie Hong was suspended when the weather finally descended and washed out that final set.

“It’s good to have singles wins,” BNL coach Joni Stigall said. “Nadia has been a trooper, she came in to varsity and has played well. She is a player that drives people crazy. She just gets everything back. Italy is improving each match. She’s showing more toughness and working on shots, and she can see the difference as well. That will just build her confidence and we need that going into the conference tourney.

“Rachel played so well tonight. She had some really smart, well-placed shots. I wish she could have gotten that match completed. I know she would have won.”

BNL’s Bella Stigall and Mallory Pride pounced on East’s Shruthika Kumar and Katie Rieckers 6-0, 6-2 at No.1, while Kenley Craig and Izzy Alldredge smacked Caroline Emerick and Adyson States 6-0, 6-0 at No.2

“Doubles was solid once again,” Stigall said. “They are playing the net well and placing shots much better. I’m excited to see what they will do in the upcoming tournaments.”

BNL will compete in the Hoosier Hills Conference tournament next week, starting at Jennings County on Monday.