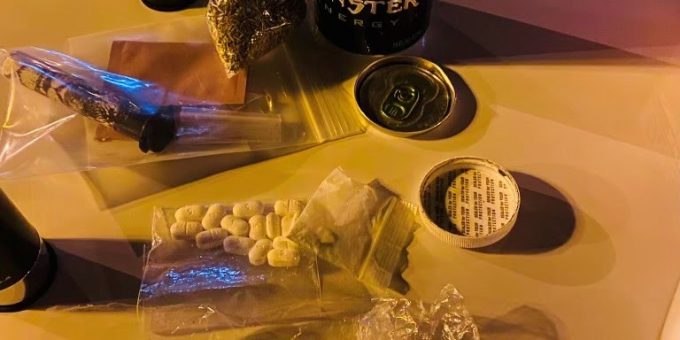 VIGO CO. – on Thursday, April 28, 2022, at approximately 9:10 p.m., Trooper Gerald Stump was patrolling in the area of South 8th Street and Putnam Avenue, when he stopped a passenger vehicle for expired plates.

The driver was identified as Jennifer L. Hinote, 40, of Terre Haute, Indiana. During the course of the traffic stop, Trooper Stump observed criminal indicators and requested a canine.  Trooper Brad Fyfe and his canine Jett, from the ISP Putnamville Post, arrived.  Jett indicated an alert on the vehicle.  A subsequent search of the vehicle discovered methamphetamine, marijuana, legend drugs, synthetic marijuana (K-2), and drug paraphernalia.

Further investigation by Trooper Stump also revealed that Hinote displayed signs of impairment.  Hinote was offered the opportunity to take a certified chemical test, but she refused.  Hinote was arrested and taken to the Vigo County Jail where she is currently being held without bond.

It was also discovered during the traffic stop that a passenger in the vehicle, Ashley Waltermire, age 32, of Terre Haute, Indiana, was in possession of methamphetamine and had an active warrant out of Vigo County for possession of a controlled substance.  Waltermire was also taken into custody and transported to the Vigo County Jail.