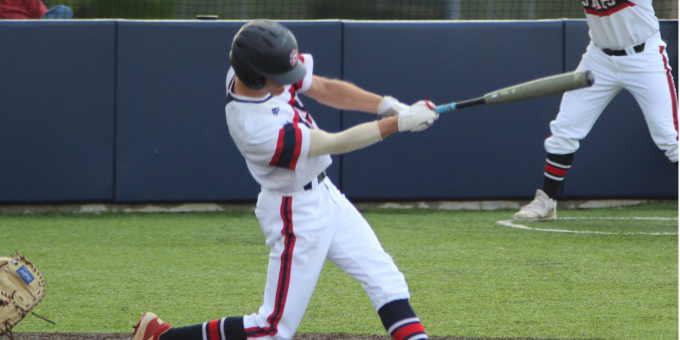 BEDFORD – Momentum in baseball, according to legendary Baltimore manager Earl Weaver, is “only as good as the next day’s starter.” That’s why Bedford North Lawrence has been able to maintain, and rebuild after a tough skid, its drive and confidence.

Pitching has been a constant strength, even during a scoreless streak that confounded the Stars, and that trend continued as Cade Mungle twirled a complete game while powering BNL to a 4-2 victory over Bloomington North on Tuesday afternoon.

Mungle, one of those “crafty left-handers” (which is a kind way of implying he doesn’t throw hard), scattered five hits and kept the Cougars (6-8) guessing with his command of three pitches. Mungle struck out only four but was masterful in his efficiency, needing only 86 pitches to go the distance as BNL (10-9) posted its fourth win in the last five games.

“It’s been a lot of fun,” BNL coach Jeff Callahan said of the recent turnaround. “Even during the losing streak, we were still playing some good baseball. Our pitchers have been fantastic. But like my dad always said, there’s nothing like winning. It feels good. The players are starting to believe in themselves and you can see our pitchers growing. They’re giving us great outings.”

Mugle’s plan of attack was basic – fastball for a first strike, off-speed for the out.

“I’m just having confidence in all my pitches, trusting everything, trusting my defense to make plays,” Mungle said. “I was getting ahead early with my fastball and keeping them off balance with my change and curveball, getting outs. It’s just executing and adjusting to the batter.”

The Stars scored first in the first. Cal Gates singled, Jonny Stone followed with a hit, and Kylar Fisher walked to load the bases. Kaedyn Bennett chased home the run with a ground out. North pulled even in the third when Cole Grupenhoff was hit by a pitch, Will Eads walked, and Graham Freund stroked a RBI single.

BNL took control in the third. Stone singled, Bennett walked, and Ryker Hughes cleared the bases with a blasted double to deep left-center.

The Cougars clawed back in the fourth. Lucas Alexander singled, took second on a ground out, and raced home when Drew Ogen reached on an infield hit and BNL first baseman Walker Ward hit the turf while stretching to take the throw. When an error put Mungle in more difficulty, Callahan called a quick time out and walked to the mound to tap Mungle on the chest. “You’re my guy” was the message. Mungle earned that confidence.

“He’s got them guessing,” Callahan said. “He’s throwing his changeup for strikes. He’s been around the zone so much more. He’s getting multiple pitches over for strikes.”

BNL added a key run in the sixth. Nate Pemberton singled, went to second on a passed ball, and scored on Grant Dalton’s huge two-out single for a critical insurance run. That played a role when Mungle got into another jam in the top of the seventh, with runners on second and third. He struck out Freund looking to end the threat and the game.

“When you win big games against good teams, you get those two-out hits to make a big difference,” Callahan said.

Stone had two of BNL’s seven hits against North lefty Caden McCoy, who fanned 8 but still suffered the loss.