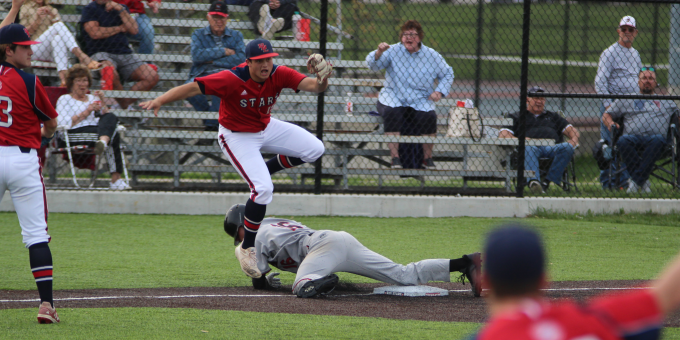 The Stars scored twice in the bottom of the fifth, then survived New Albany’s serious threat in the seventh for a smashing 5-4 triumph on Monday afternoon. Will Adams fanned the final two batters to escape the final threat, and BNL scored the go-ahead run on a bunt while fencing in the Bulldogs.

The pregame buzz focused on the accident in center field, when a parked vehicle slipped out of gear and rolled through the fence, forcing a hasty repair. The postgame buzz focused on BNL’s sharp comeback and the gutsy relief performance by Adams, who successfully steered through base traffic and trouble.

Thrust into the fire in the fifth, with New Albany having already taken a 4-3 lead and the bases still loaded, Adams got a key strikeout and a ground out to end the rally. In the seventh, with two on and one out, he fanned Carson Chandler and Chase Loesch to cap BNL’s third one-run win of the season.

Adams doesn’t scare anyone with velocity. Yet nobody hits him hard.

“Will came in a tough spot, got a big out, wiggled out a little bit of jam,” BNL coach Jeff Callahan said. “He’s going to give you everything he’s got. He doesn’t throw the hardest, but he’s going to make them swing the bat. He will give you a chance to hang on and win.”

And that’s exactly what happened. BNL hung on, improving to 9-9 with a solid start (three runs in the first) and photo finish (two runs in the fifth to take the lead).

“That’s the thing about these kids,” Callahan said. “They don’t give up. That’s something that’s good to have. They’re willing to do what the team needs to win. It’s not an individual sport. It’s a team sport.”

BNL took control with the early surge. Grant Dalton reached on an infield hit, Cal Gates scampered aboard with a bunt, and Jonny Stone singled to load the bases. Kylar Fisher drove in first run with a line drive to left, Kaedyn Bennett chased home another run with a fielder’s choice, and Kline Woodward singled to left for the third run.

The Bulldogs (11-6) weren’t muzzled yet. Landon Gum ripped a two-run double down the left-field line in the second, and University of Louisville recruit Tucker Biven bashed a double to deep left-center – hit hard to enough to gash the fence if it had hit it on the fly – to plate a run in the third. New Albany took the lead in the fifth on two walks and Andrew Clements’ RBI single before Adams entered and slammed the door.

“We had so many opportunities to score,” New Albany coach and Hall of Famer Chris McIntyre said. “Give those guys (including BNL starter Walker Ward) credit, they competed. But we’re striking out against not-velocity. I can’t imagine what we’ll do when we face 92 mph. I was disappointed. We have guys that are better baseball players than that. We just didn’t play very well.

“We looked lethargic out of the gate. We set a bad tone for the first inning, and it kind of spiraled. The margin for error is not real big. You have to be sharp, you have to play clean baseball. Or you’re going to lose.”

Case in point, New Albany had two base runners thrown out in the fourth. Loesch stroked a hit down the left-field line, but BNL’s Ryker Hughes fired a laser to second as Loesch attempted to stretch the hit to a double. Gum followed with a single, and he raced for third when Cody Hartlage singled to left. Once again, Hughes was tested and aced the exam, throwing out Gum at third. The Dogs broke two baseball commandments: thou shalt not make the third out at third base, and thou shalt not run on Hughes.

BNL’s rally in the fifth started with one-out singles by Bennett and Woodward, then a sharp single to left by Adams for a 4-4 deadlock. Maddox Ray drove in the go-ahead run with another bunt as BNL went small ball for a big win.

Clements had three hits for the Bulldogs.

Actually, the Stars left the most runners on (10) while totaling 15 hits. Woodward was 3-for-4 while Dalton, Gates, Stone and Fisher had two each, powering BNL to what could be considered its signature win thus far.

“It’s one of them,” Callahan said. “New Albany is a good program. We have to play against good competition like that in the conference tournament, and the sectional, in order to win a championship.”