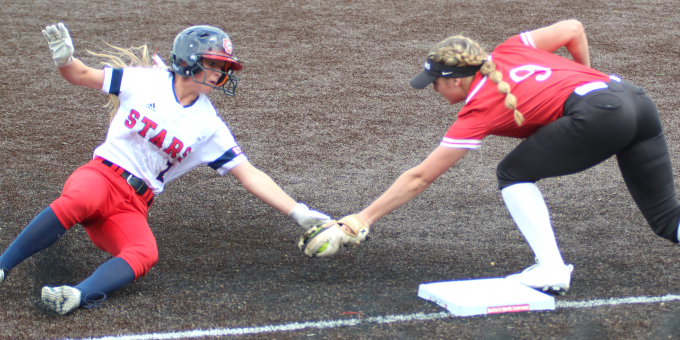 BEDFORD – If Center Grove left-handed hurler Riley Henson registers 100 on the weight scale, it’s because, as her coach indicated, ”it’s all the ice water in her veins.” Small, slender but sinister, she registered 100 on the emoji scale.

Henson, a sophomore with wicked stuff, fired a two-hit shutout, pushing the hard-to-figure Trojans to a 2-0 victory over Class 4A No.3 Bedford North Lawrence in the second game of a split doubleheader on Saturday. The Stars (15-2) hammered Loogootee 10-0 in five innings in the opener

What wasn’t hard to figure out was Henson’s performance. She struck out 11, surrendering a lead-off single by BNL’s Lauryn Anderson and a pop-up by feared slugger Ava Ratliff that dropped untouched on the infield. The rest of the way, the Stars were as silent as the tomb, expect for a couple of loud outs that backed Center Grove outfielders up against the fence.

“Every time she pitches, she gives us a chance to win,’ Center Grove coach Alyssa Coleman said. “She was hitting her spots, getting ahead, keeping us in it. She’s so good. She’s an amazing competitor. It’s so fun to watch.”

The Trojans (11-6 and ranked No.8) came to BNL with three straight losses, but they struck quickly for both their runs in the first against BNL ace Annie Waggoner (11-2). Lead-off slap hitter Hannah Haberstroh reached on an error. Ashlynn Wolff dropped a sacrifice bunt, and Haberstroh never hesitated while rounding second and heading for third, which was left uncovered while Maddy Bennett fielded the bunt. Lauryn Anderson’s throw to third got away, and Haberstroh trotted home for a 1-0 lead. Riley Janda followed with a triple to the right-center gap, and with two outs Emma Fair dropped a soft bloop single into center for the second run.

And that was enough.

BNL threatened with its two hits in the first, but Henson escaped with a pop up and strikeout. In the fourth, Braxton McCauley chased right fielder Jazi Cangany to the fence for a long out, and Aliza Jewell did likewise with a blast to center in the sixth. BNL had two runners with two outs in the fifth, and Henson fanned Waggoner to end the threat.

”These are the types of games we have to play,” BNL coach Brad Gilbert said. “There’s a good chance they’ll be a semistate team, if we make it. We have to play quality teams, in pressure situations, and learn.

“You can have a two-strike approach with no strikes. Just because the pitcher throws fast doesn’t mean you speed up your swing. If we have a smooth swing, the ball will jump off the bat.”

Waggoner was equally impressive, striking out 8 and scattering four hits. Janda had two triples. But the spotlight was brightest on Henson, who shut down one of the state’s top offenses.

”TheIr reputation precedes them,” Coleman said. “We know they can hit. We have to face the best to know if we’re there. We have been up and down as a team. At this point, we don’t know which team will show up. We have to be more consistent.“

BNL 10, Loogootee 0 – In the morning opener, the Stars overpowered the Lions. Jewell allowed only one hit and struck out 10 while going 4-0 this season.

“She threw really well,” Gilbert said. “We hit the ball well, made the plays. That was a good,solid win.”

Jewell also slugged a 3-run homer in the first to start the scoring. Carsyn Alvey had a RBI double in the third, Carlee Kern had a bases-loaded double and Bennett added a RBI single in the fourth, Ratliff cracked her state-leading 15th home run in the fifth, and Kern smacked a run-scoring double to end the mercy-rule triumph.

The Stars will host Barr-Reeve on Tuesday.