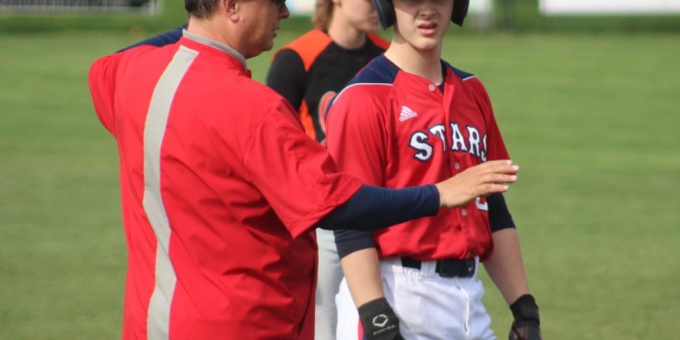 HUNTINGBURG – Bedford North Lawrence’s late rally came up one run short in the championship game of the Raider Hardball Classic on Saturday.

The Stars, who trailed by 5 runs three different times in the finale, scored twice in the seventh and had the tying run thrown out at the plate as Southridge edged BNL 11-10 in a wild title clash. BNL (8-9) advanced to the final with an 8-3 triumph over Heritage Hills in the semifinal.

BNL, playing its sixth game in five days, hit double digits in scoring for the third time this season.

“We knew we would have to score some runs to win it,” BNL coach Jeff Callahan said. “We used some guys that hadn’t pitched much, but they kept us close. The kids competed. They’re a tired bunch.“

BNL 8, Heritage Hills 3 – In the opener, Ryker Hughes went the distance on the mound, allowing only six hits and two earned runs while striking out 8. The Stars took control with a five-run fourth inning.

“Ryker pitched well,” Callahan said. “He did a nice job of keeping them off balance and mixing his pitches. We got some key hits, expanded the lead. It was a good win.”

BNL took a 1-0 lead in the third on Grant Dalton’s one-out double to right and Jonny Stone’s two-out RBI single. In the fourth, with the bases loaded, Cal Gates stroked a RBI single, Dalton smacked a run-scoring single to right, Will Ward drove in a run with a walk, and Stone followed with a two-run single.

Dalton capped the BNL scoring with a two-run single in the fifth. Dalton went 3-for-3, Stone was 2-for4 with 3 RBIs, while Kylar Fisher, Hughes and Gates all had two hits. Austin Hills and Evan Bowling had two hits for the Patriots.

Southridge 11, BNL 10 – In the championship clash, Southridge (the defending Class 3A state champion) took leads of 5-0, 8-3 and 11-6 before BNL’s furious comeback was thwarted.

“It would have been easy to give up, when we were tired and it’s been a long week,” Callahan said. “But they came back and answered.”

BNL started its multiple comebacks in the third with Fisher’s two-run single during a three-run frame. In the fifth, Hughes cracked a two-run double and Kline Woodward added a RBI single, and Kaedyn Bennett had a RBI single in the sixth. In the seventh, Gates blasted a bases-loaded double to score two, but Dalton was cut down at the plate as the Raiders preserved the lead.

Bennett had two hits while Hughes, Gates and Fisher all had 2 RBIs.

Mike Ubelhorg was 3-for-4 with 2 RBIs, Carter Whitehead was 2-for-3 with 3 RBIs, and Tate Whitehead went 3-for-4 for Southridge.

“It’s another one-run game,” Callahan said. “We’ve battled in a lot of games. We could have a few more wins, but we’ve won some games that could have easily been a few more losses. I feel like it was more important to play good competition and let our record say what it is. Every pitch, every ball in play, is very important.”

The Stars will host New Albany on Monday