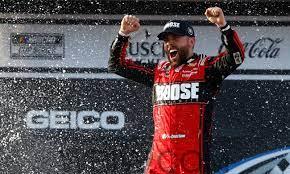 TALLADEGA – Ross Chastain, of Trackhouse Racing took the checkard flag in a wild race Sunday at the Geico 500 at the Talladega Superspeedway.

Thirty-nine drivers took to the track Sunday for one of the most highly anticipated races of the year.

There were six caution periods for a total of 28 laps.

Twenty-one of the 39 drivers in the race finished on the lead lap.

About halfway through Stage 1, drivers began to pit. Brad Keselowski and Chastain received penalties for speeding on pit road, and Cody Ware came in too quickly and spun out, while Tyler Reddick appeared to make an unscheduled stop to get a look at his engine. It was bad news for Reddick, whose timing belt broke on his car, ending his race for the day.

Three cars collided in the middle of the lead pack. It appeared Daniel Hemric’s engine let go and he found himself crashing into the path of Chase Briscoe, who ended up climbing out of his car, and Chris Buescher.

Hemric, who qualified third, was the second ECR engine to fail in this race after Reddick’s issue earlier.

“Just toward the end of the stage and we were trying to get stage points because at the end of this deal you never know what can happen,” said Briscoe. “That is not normally the mentality I would go with. I normally try to ride around and wait until the end. It seems like we always get so desperate toward the end of the stages. I felt like if I could get to the bottom I could get to eighth or ninth, if I was lucky. Looking back, that obviously wasn’t the right decision. The 16 (Daniel Hemric), I don’t know what happened to him. I know I got into the back of somebody and then the 16, I saw him on the apron and he kind of landed in my lap when I came back across the racetrack. It was a hard hit but I feel a lot better than I thought I was going to when I saw the hit coming. All good. Unfortunate to kind of have a huge hole points-wise now. I guess we go to Dover next week and see if we can have a better result.”

Stage 1 ended under caution after the three-car accident in Turn 4. Bubba Wallace was ruled the leader at the moment of caution, giving him a stage win in this race for the second year in a row.

The green flag was back out at Lap 64, but that didn’t last long.

The right rear wheel fell off of BJ McLeod’s car, drawing an immediate caution, as he drove back to the pits on three wheels. McLeod was still running after suffering severe suspension damage from his wheel failure.

Then, Logano, who appeared to get a bad push from Wallace, got turned into the outside wall and shot back into traffic, collecting a handful of cars as drivers tried to get back up to speed.

Logano, Ty Dillon and Harrison Burton were out of the race, joining Hemric, Briscoe, Buescher and Reddick. Suárez was out as well after his team was unable to repair his car within the allotted time permitted.

The green flag was back out at Lap 97 after two cautions less than a lap into two consecutive restarts.

Byron and Truex Jr. led the field, while Cole Custer, whose car sustained front-end damage in the most recent accident, exited to the garage area.

Four Hendrick Chevys (Byron, Elliott, Larson and Bowman) were in the lead as the stage winded down.

The lead train of cars consisted of 12 cars with five laps to go in the second stage, but it was Byron who came out on top.

The green flag was out again with 63 laps to go, as Kyle Busch got a big push from Ryan Blaney, which allowed him to get out ahead of Jones before Jones fought back with a push from Kevin Harvick.

The entire lead pack went single file with 50 laps to go, as Wallace offered a helping hand to Blaney.

Then, Wallace regained the lead, while some cars opted to pit.

Keselowski got his second pit road speeding penalty of the day, while Bell spun into the inside wall after coming off pit road with Noah Gragson and Kyle Busch. Bell suffered minimal damage, but continued.

There were many lead changes in the final few laps of Sunday’s race, as all drivers in the lead pack made their best passes to get out in front.

The lead pack was side-by-side with six laps to go, with Jones in the lead. Pushes got harder and more aggressive as the laps remaining dwindled.

Things started to break up with three laps to go. Denny Hamlin went to pit road with apparent fuel pressure issues, while Jones held down the lead at the white flag.

In the end, it was Chastain who came out with the win — his second victory of the season.

Harvick earned his fourth top-10 of the season and his 19th top-10 in 43 career NASCAR Cup Series starts at Talladega.

This was Harvick’s third straight top-10 at Talladega. He finished eighth in October and fourth in last year’s GEICO 500. It is the first time since early 2015 that Harvick has had three consecutive top-10s at Talladega. In three straight races at Talladega in 2014-2015, Harvick finished seventh (May 2014), ninth (October 2014) and eighth (May 2015).

Custer led one lap to increase his laps-led total at Talladega to eight.

“We tried to play it safe in the first stage and stayed out of trouble for the most part all day. We did have a piece of debris shoot through the nose of our Smithfield/IHOP Ford early in the race and we had to pit to repair that. We had good balance all day for the most part. There at the end, we just didn’t get hooked up with the run we needed to push up to the front. We left Talladega in one piece, so there is something positive to take away from the day,” said Aric Almirola, driver of the No. 10 Smithfield / IHOP Mustang

Chase Elliott remains the championship leader after Talladega with a 21-point advantage over second-place Ryan Blaney.

The next event on the NASCAR Cup Series schedule is the Dover 400 on May 1 at Dover (Del.) Motor Speedway. The race begins at 3 p.m. EDT with live coverage provided by FS1 and SiriusXM NASCAR Radio.