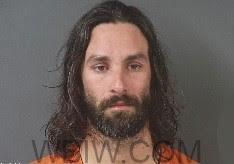 PUTNAM CO. – On Thursday, April 21, 2022, at approximately 1:15 p.m., Indiana State Police Putnamville Trooper Colton Maynor was patrolling in Putnam County when he observed a red truck traveling 77 miles per hour on US 40.

Trooper Maynor activated his emergency lights on his fully marked state police commission, to conduct a traffic stop near County Road 600 east.  Once stopped, the driver attempted to exit the truck.  Trooper Maynor ordered the driver to stay in the truck and to place their hands on the steering wheel.  Upon Trooper Maynor’s approach, the driver placed the truck in reverse and accelerated, ramming into Trooper Maynor’s commission and pushing it into US 40.  The truck then drove through a ditch, fleeing eastbound on US 40.

Seeing that Trooper Cox, Jr., was closing in, the truck turned south off of US 40 onto County Road 1000 East and continued traveling on several county roads.  The driver eventually lost control of the truck while attempting to turn from one county road to another, spinning out of control and into a ditch, disabling the truck.  Troopers Maynor and Cox, Jr., then conducted a felony traffic stop and were able to take the suspect into custody without incident.

The suspect was positively identified as Matthew L. Renten, 35, of Green Cove Springs, Florida.  Further investigation by Trooper Maynor discovered that Renten displayed signs of impairment.  He was provided the opportunity to submit a certified chemical test and those results are currently pending through the Indiana Department of Toxicology.  Upon being medically cleared at the Putnam County Hospital, Renten was arrested and taken to the Putnam County Jail where he is currently being held.

Matthew L. Renten is facing charges of resisting law enforcement, reckless driving, and leaving the scene of an accident.