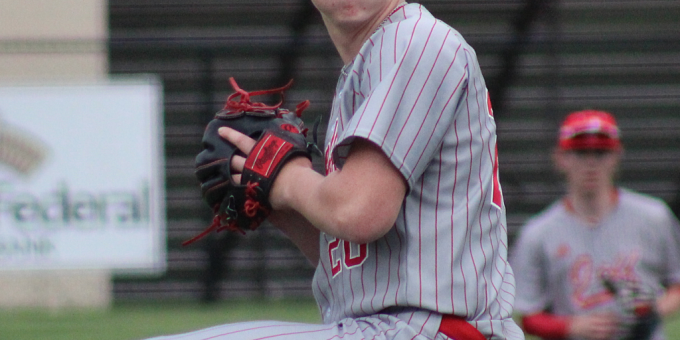 McEwen won a terrific duel with BNL starter Ryker Hughes, who allowed only five hits but was victimized by two unearned runs in the fourth inning. That was all the offense McEwen needed as he escaped two BNL threats. In three straight outings against the Stars, McEwen has pitched 21 scoreless frames.

“When you’re playing good teams against each other, each team will get two or three chances to score some runs,” BNL coach Jeff Callahan said. “They got a chance and get a big two-out hit. We had chances but couldn’t get them over and get them in.”

“He’s a good pitcher. We did a good job at the plate, it was a much better approach, even though the results were the same.”

The Red Devils got on the board when Jaret Phillips reached on an error and Rafe Swearingen singled him to third. Phillips scored on a passed ball as Swearingen took second, and he scored the second run when McEwen dropped a single into center.

BNL’s first opportunity came in the second. Grant Dalton opened with a lead-off double, but he was cut down at third when Kylar Fisher attempted a sacrifice bunt. Kaedyn Bennett followed with a single to center before McEwen got the next two outs on ground balls.

In the fifth, Bennett cracked a lead-off single and Maddox Ray reached when his bunt was misplayed. Again, McEwen got out of the jam with an infield pop out and two fly balls.

BNL’s only other hit was Ray’s two-out single in the seventh. McEwen struck out 5 and got 11 fly-ball outs while throwing 111 pitches. Hughes fanned only one and worked around four walks. Hunter West had two hits for the Devils.

“Ryker battled,” Callahan said. “He didn’t have his best stuff, but those are the days you have to grind it out. He did some really good things and competed. He’s pitched well all four of his outings. He will always keep us in the game.”

BNL will visit Linton on Monday.